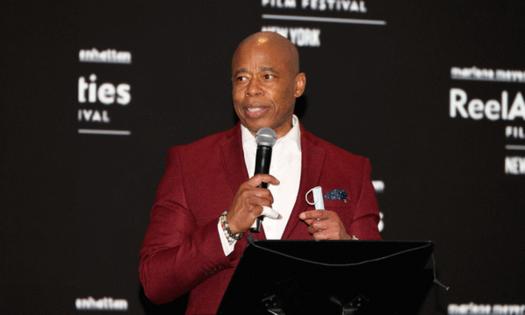 Instead of fining or arresting weed sellers, Adams wants the city to encourage illicit (aka legacy sellers) to join the legal market.

New York, New York, so nice they named it twice, got a message from its mayor who told Big Apple residents they should feel free to buy, sell and consume weed whereever they wish.

Mayor Eric Adams promised not to take a “heavy-handed” approach toward those illicitly selling marijuana in the city. Now that recreational cannabis is legal, though sales won’t launch until later in the year, the mayor said he sees no need to crack down on sales in the interim.

“There needs to be a system of not heavy-handedness, but going in and explaining to that store that, ‘Listen, you can’t do this,’ give them a warning,” Adams told reporters at a cannabis industry expo at the Javits Center in Manhattan.

Instead of fining or arresting weed sellers, Adams wants the city to encourage illicit (aka “legacy sellers”) to join the legal market.

If someone refuses to get with the program after a warning, “some form” of enforcement may be warranted, the mayor said.

“If they refuse to adhere to the rules, then you have to come back and take some form of enforcement actions, such as a summons, such as, you know, talking about their ability to sell alcohol,” said Adams, a former police officer who has said he’d reinstate NYC’s controversial stop-and-frisk policy though it has been declared unconstitutional.

In 1999, Blacks and Latinos made up 50 percent of New York’s population but accounted for 84 percent of the city’s stops, many allegedly for suspicion of cannabis possession. Was The Mayor Serious? Adams joked at the NYC Cannabis World Congress and Business event last week that he was “a bit disappointed” that there wasn’t “a nice scent of weed” in the room and encouraged attendants to get high.

Seriously? All forms of indoor and most outdoor smoking have been prohibited in NYC since 2002, preceded by the city’s 1988 Smoke-Free Air Act.

“Enjoy yourself, light up, but most importantly, spend some money. We want your money,” he said. Doubtless, he was serious about the latter.