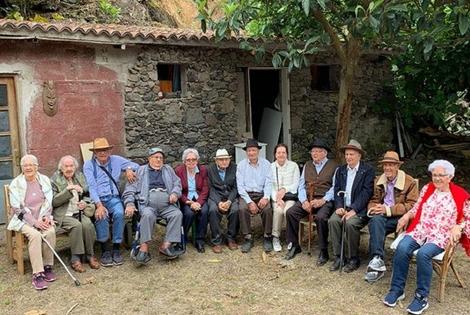 (UPI) A family of 12 siblings in Spain were awarded a Guinness World Record when their combined age was confirmed as 1,058 years and 249 days.

The Hernandez-Perez siblings, who grew up and still live in the town of Moya on the island of Gran Canaria, range in age from 76 to 97.

"We never thought we'd break a world record," the family, composed of seven brothers and five sisters, said in a statement to Guinness World Records.

"It all started as a joke during a family reunion in June. Then, after seeing a newspaper article titled '12 siblings count more than 1000 years,' we started gathering information and reached out to Guinness World Records," the statement said.

(UPI) Students and faculty members at a Texas high school were confronted with an unusual situation when a raccoon ran into the school's cafeteria.

(UPI) A group of 250 dancers broke a Guinness World Record for the largest amapiano dance in South Africa.

The attempt, which was filmed for e.tv series Stumbo Record Breakers, was led by actress and singer Bontle ...Read More

(UPI) Authorities in Michigan helped a farmer round up six emus that escaped and went running loose near a busy road.

(UPI) A Missouri man on his way to go fishing with his brother made a pit stop at a gas station and won $50,000 from a scratch-off lottery ticket.

The Missouri Lottery said the player, whose name was not released, was on ...Read More

(UPI) An injured bald eagle that escaped from rescuers while being transported for veterinary care in Texas was safely recaptured the next morning.

(UPI) Officials in a Florida county are trying to identify a mysterious, long-buried wooden object partially unearthed by erosion.

Volusia County officials said the object, which appears to be part of a wooden structure, ...Read More