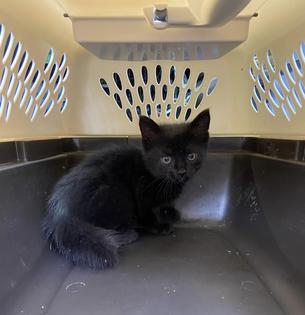 (UPI) Animal control officers in Massachusetts came to the rescue of a 5-week-old kitten that spent days trapped inside the wall of a home.

The Dedham Police Department said in a Facebook post that animal control officers responded to a home where a resident had heard a kitten crying for "a few days" before realizing the sound was coming from inside a wall.

The officers determined the kitten "was trapped inside an opening in the exterior wall."

Officers attempted to lure the cat out with food, but the baby feline fled back into the wall whenever it was approached by humans.

The officers were finally able to block the opening behind the kitten when it came out for food, allowing them to grab the 5-week-old animal.

The kitten, now dubbed Rowenna, was taken to the Animal Rescue League for care and veterinary attention. The feline will eventually be made available for adoption, the post said.

(UPI) A Guinness World Record was broken at the University of California Irvine when 1,415 students participated in a game of red light/green light.

The school announced 1,415 students participated in the traditional ...Read More

(UPI) A Central Florida family captured video when they had an unusual visitor -- a large monitor lizard climbing on a window.

Jocelyn Penson, who posted the video to Facebook, said the footage was filmed at the home of ...Read More

(UPI) Volunteers with a Texas charity broke a Guinness World Record when they assembled 10,852 sandwiches and placed them into a line.

(UPI) An Oklahoma firefighter helped a resident with an unusual situation when a snake slithered into the undercarriage of her car.

(UPI) A Florida highway was littered with hundreds of cans of beer early Wednesday morning as a result of a crash involving five semi trucks and a pickup, police said.

(UPI) A wildlife officer responded to a Colorado home to evict an unwanted guest -- a bear taking shelter under the family's front porch.