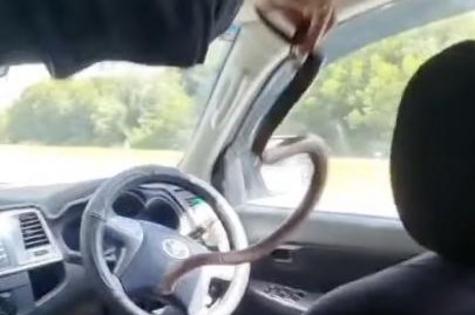 (UPI) A couple in Australia got quite the scare when an unwanted visitor slithered across their feet while driving: a venomous red-bellied black snake.

The incident occurred along the Bruce Highway in Queensland, along the country's eastern coastline.

The footage of the snake came courtesy of a Facebook post from Sunshine Coast Snake Catchers, specialists who were called in to remove the 3.5-foot snake from the couple's camper van after it made the unscheduled appearance.

"We just had a frantic call for a couple with a forward driving caravan, who were driving along, and they had a bloody red-bellied black snake in their car!" the snake catcher says in the video. Not in their engine bay, not in the front or the windscreen, in their car while they're driving.

The snake is seen laying in the car along the driver's side, and the snake catchers can then be seen using a special hook to remove the snake, eventually capturing it in a bag.

The snake catcher is then seen releasing the snake back into the forest.

"Yes you read that correctly, this is hands down one of the craziest jobs we have ever had!" the snake catchers wrote on Facebook. It was a tough one to catch as well as I didn't want to have my back facing the highway and had grab the snake and lift it over the front seats without getting bitten!

"There were a couple of close calls but hey got the job done!"

Indigenous to Australia, the red-bellied black snake is one of the most commonly found species of snake in the country, according to the Australian Museum.

The serpents are responsible for numerous bites throughout Australia every year, according to the museum.

(UPI) Sheriff's deputies in Florida came to the rescue of a deer found entangled in a mesh hammock.

(UPI) Police in New York came to the rescue of a bald eagle found on a highway after colliding with a truck.

(UPI) A Missouri woman said she was shocked when a Powerball ticket that was forgotten in her purse for over a month turned out to be a $50,000 winner.

(UPI) A daredevil high line walker broke a world record by walking nearly 1.4 miles on a line suspended at Mont-Saint-Michel in France.

(UPI) Animal rescuers responded to a California home to help a horse that ended up stranded in its owner's empty backyard pool.

The San Diego Humane Society said in a Facebook post that the horse's owner summoned help to ...Read More

(UPI) A seal that became a local celebrity when it took up residence in a Massachusetts pond for about a week was taken to an aquarium after wandering out of the water and going exploring.