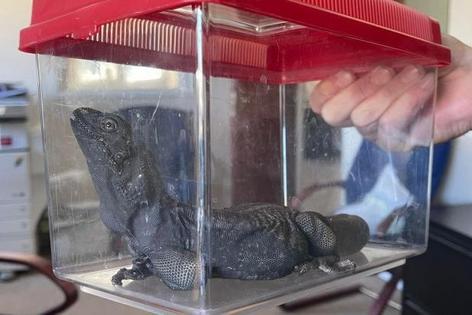 (UPI) Animal rescuers on the island of Guernsey said they were called out for a report of a toad in an airport parking lot and arrived to find the animal was actually a monitor lizard.

The Guernsey Society for the Prevention of Cruelty to Animals said in a news release that rescuers were dispatched Tuesday on a report of a toad wandering loose in the Guernsey Airport's parking lot, but they arrived to find a "very different animal."

"The call was to go and help a poorly toad but when I got there it wasn't a toad at all but a very black water dragon," GSPCA rescuer Neil Hughes said in the news release.

Black water dragons are a type of monitor lizard.

"The lizard is now back at the GSPCA in one of our vivariums," Hughes said.

The reptile is believed to be an escaped pet and officials are now attempting to find the owner.

(UPI) Sheriff's deputies in Florida came to the rescue of a deer found entangled in a mesh hammock.

(UPI) Police in New York came to the rescue of a bald eagle found on a highway after colliding with a truck.

(UPI) A Missouri woman said she was shocked when a Powerball ticket that was forgotten in her purse for over a month turned out to be a $50,000 winner.

(UPI) A daredevil high line walker broke a world record by walking nearly 1.4 miles on a line suspended at Mont-Saint-Michel in France.

(UPI) Animal rescuers responded to a California home to help a horse that ended up stranded in its owner's empty backyard pool.

The San Diego Humane Society said in a Facebook post that the horse's owner summoned help to ...Read More

(UPI) A seal that became a local celebrity when it took up residence in a Massachusetts pond for about a week was taken to an aquarium after wandering out of the water and going exploring.