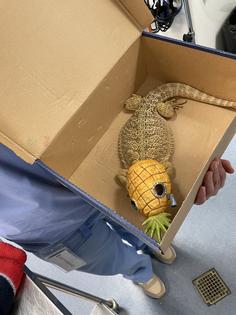 (UPI) Veterinarians at a Massachusetts animal hospital rescued a bearded dragon from an unusual situation when the lizard got his head stuck inside a toy pineapple.

The New England Animal Medical Center in Bridgewater said in a Facebook post that Randy the bearded dragon's owners brought him in when he got his head stuck inside a toy pineapple -- the undersea home from SpongeBob SquarePants.

"Randy, the bearded dragon, tried to visit SpongeBob Square Pants yesterday and ended up in the ER," the post said. We're not laughing at you Randy, we are laughing with you.

The veterinarians said they broke the toy open to free Randy without injury.

"The pineapple didn't make it, but Randy is back home happily laying in the sun," the hospital wrote.

The post said Randy's predicament was "the cutest emergency we've ever had."

The Fairfax County Fire and Rescue Department said in a Facebook post that the B-Shift crew from Tower ...Read More

(UPI) Officials in southwest Florida said deep holes found on area beaches are believed to be the result of visitors attempting a TikTok challenge.

Allison Ward of Sanibel said she has found four holes -- up to 5 feet ...Read More

(UPI) An unusual house for sale in Oklahoma is drawing attention online due to its resemblance to the titular family's domicile from classic cartoon series The Jetsons.

(UPI) A Florida police officer and a municipal employee came to the assistance of a resident who found an alligator sunning itself on their patio.

(UPI) A Florida teenager made an adventure out of flooding in his area by tying a rope to the back of his dad's truck and going wakeboarding in the streets.

Brett Holland, 16, said he saw the flooding in the aftermath of ...Read More

(UPI) A northern Minnesota family captured video when they spotted an unusual non-avian perched on a bird feeder -- a black bear.

A video of the bear balancing on the bird feeder was posted to Twitter by user @AH55408, ...Read More