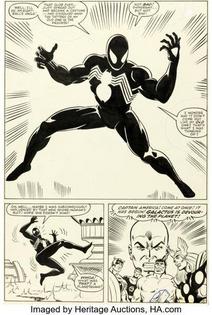 Heritage Auctions said the original artwork by Mike Zeck, which became page 25 of Secret Wars No. 8 in 1984, is now the world's most valuable page of original comic book artwork after being auctioned for $3.36 million.

The page featured the first appearance of Spider-Man's black costume, an alien symbiote who went on to form half of the villain -- and sometimes anti-hero -- Venom.

"We could not be happier, especially for our consignor, who bought the art in the late 1980s and treasured these pages ever since," Joe Mannarino, Heritage Auctions' New York Director of Comics & Comic Art, said in a news release.

The results "prove what we've long been saying: Comic book art is as beloved and valuable as anything put on canvas."

Heritage said Spider-Man already was the star of the most expensive comic book ever sold, after a copy of Amazing Fantasy No. 15, the web-slinging hero's first appearance, sold for $3.6 million in 2021.

(UPI) More than 2,000 students from three Indiana high schools came together Friday to attempt a Guinness World Record for the largest game of Duck, Duck, Goose.

(UPI) A British library said a book checked out more than 60 years ago was finally returned to the facility after being found at another library in Croatia.

(UPI) A pair of extremely distressed sneakers offered by luxury brand Balenciaga are drawing attention online for their "full destroyed" look and their hefty price tag: $1,850.

(UPI) Animal rescuers in Texas fished a muddy dog out of a storm drain and were able to reunite the canine with his owner.

The Austin Animal Center said in a Facebook post that a pair of animal protection officers were ...Read More

(UPI) An 82-year-old Maryland woman achieved a longtime dream by walking across the stage to accept her bachelor's degree.

Mae Beale, 82, who had a long career as a licensed practical nurse, returned to school in her late...Read More

(UPI) Animal rescuers were summoned to a warehouse office in Australia when a mother kangaroo with a joey in her pouch somehow found her way into the building.

Andrew Hargreaves said he went into the back of his office in...Read More