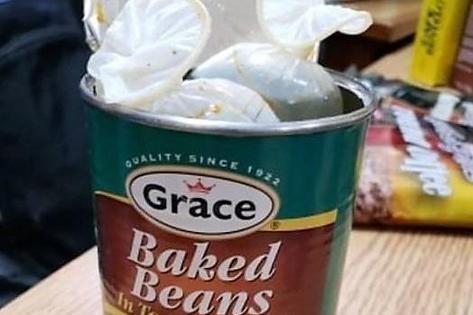 Kelly was arrested in January 2020 while imprisoned on another charge and Gilhooly was arrested two months later. Each were charged in April 2021 with evading Britain's prohibition on the importation of a Class A drugs into the country in connection with the scheme, authorities said.

Kelly was sentenced to more than six years after pleading guilty while Gilhooly drew more than eight years imprisonment after being found guilty at trial.

An investigation carried out jointly by the Met Police and the National Crime Agency determined the pair orchestrated a plan to smuggle nearly 3 kilograms of cocaine from the Caribbean island of St. Lucia into Britain by packing the drugs into cans labeled as food items such as baked beans and coconut milk.

The cans were seized by customs officials in December 2018, prompting a probe that led them to discover that Kelly and Gilhooly had flown to St. Lucia shortly before the cans were mailed from there to addresses in Charlton and Greenwich in southeast London.

"Both men travelled to St. Lucia with the sole purpose of importing Class A drugs back into the United Kingdom," Metropolitan Police Detective Inspector Matthew Webb said in a statement.

"The miserable effect that drugs supply has on our communities is undeniable and inextricably linked to violence within our communities. Both men were willing to take such risk with this offending -- thinking they were beyond the reach of the law and hoping to monetize profits.

"Instead, they now face hefty prison sentences. I hope this provides them the opportunity to reflect on their behavior and demonstrates that crime doesn't pay," he added.