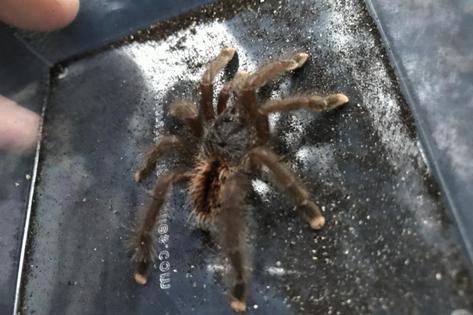 (UPI) Passengers on a London Underground train were shocked to come face-to-face with an unusual straphanger -- a tarantula.

The RSPCA said commuters spotted the tarantula in a plastic tub on a train that arrived at the London bridge station.

The tarantula was handed off to station staff members, who contacted the RSPCA.

Animal Rescue Officer Mat Hawkins visited the station to bring the spider, identified as a pink-toed tarantula, to specialists at the South Essex Wildlife Hospital.

"Passengers got more than they bargained for when they spotted this little guy on the train! He was shut inside a plastic tub so we believe he had been abandoned in the carriage," Hawkins said in an RSPCA news release.

"Thankfully, passengers alerted staff, who kept him safe in their office until I could arrive to collect him."

Pink-toed tarantulas are native to Central and South America and islands in the Southern Caribbean. They commonly are kept as pets.

The South Essex Wildlife Hospital said the apparently abandoned tarantula will be given a new home.