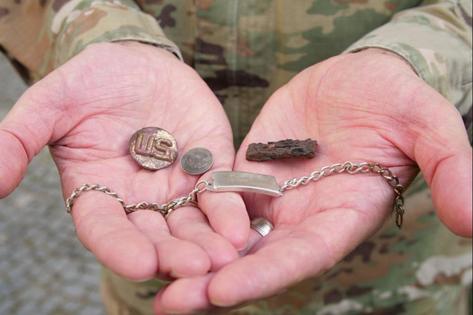 (UPI) A man using his metal detector in the woods around Prague reunited a Colorado man with a silver bracelet and other items stolen while he was serving in World War II.

Petr Svihove, a Czech journalist and history enthusiast, was using his metal detector in the Prague-area woods when he found a stash of items including a silver bracelet, a service ribbon with a bronze star, a U.S. Army lapel pin and a Swiss coin.

The bracelet was engraved with the name Joe Esquibel on one side, and his wife's name on the other.

Svihove posted photos of the item to a Facebook group, and Grand Junction resident Alena Busovska saw the post and was able to track down Esquibel's family and put them in contact with Svihove.

Esquibel said he was shocked to learn his property had been found 76 years after the items, and the duffle bag that contained them, were stolen in the Prague area while he was serving as a U.S. Army staff sergeant in World War II.

"I was more surprised really more than anything else," Esquibel told KKCO-TV.

"My dad was very surprised and happy to have his items, but he stared into them just looking at them because they were lost for 76 years," said his daughter, Jolene Esquibel-Archuleta. And it meant a lot to him to have it back.

Esquibel-Archuleta said the bracelet was especially significant for her father, as it bears the name of her mother, who died two years ago.

(UPI) A group of 1,369 people in vampire costumes gathered at a 13th century abbey in England to celebrate the 125th anniversary of Bram Stoker's Dracula and break a Guinness World Record.

(UPI) The Owasso Library in Oklahoma has gotten back its copy of book Annie Annie by author Molly Cone, 46 years after it was due.

The library uploaded to Facebook a photo of the book, which looks lightly damaged.

(UPI) A man from Owings Mills, Md., named Charles, has won $50,000 playing the lottery by using numbers from his job.

(UPI) National Road Trip Day, celebrated annually on the Friday before Memorial Day, was started by a truck stop chain in 2019 to mark the unofficial start of the summer travel season.

(UPI) Veterinarians at a Massachusetts animal hospital rescued a bearded dragon from an unusual situation when the lizard got his head stuck inside a toy pineapple.

(UPI) A South Carolina man said his need to pick up milk led to his winning a $2 million lottery jackpot.