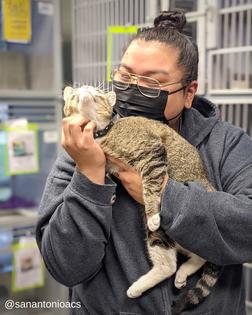 (UPI) Animal rescuers in Texas said a cat recently picked up as a stray was reunited with her family, who revealed the feline had been missing for six years.

San Antonio Animal Care Services said in a Facebook post that a stray cat was picked up recently when a resident reported the feline appeared to be ill. The responding officer discovered the female feline had a microchip.

The officer visited the home listed in the chip's information, but discovered the family had relocated.

The cat was taken in for veterinary care and officers continued to search for the family.

Animal Care Services said it took about two weeks of searching, but it was able to contact a woman identified only as "Mrs. F," who told officers the cat, named Monkey Face, had been missing for six years.

The post said the reunion between pet and owner was "priceless."

"It was easy to see the joy they had cuddling after such a long time," ACS wrote.

(UPI) A Michigan woman checking her email spam folder for a missing message made a far more surprising discovery -- she had won a $3 million lottery jackpot.

(UPI) An Australian woman said she was shocked to open a package of broccoli from a local supermarket to discover a live scorpion lurking inside.

Chloe Mitchell said her father-in-law bought the broccoli from the Aldi ...Read More

The University of Lille team, whose findings were published in the journal Physical Review Fluids, said their ...Read More

(UPI) A Missouri company specializing in custom corn art used a large field to pay tribute to the Kansas City Chiefs with a message: "KC Got Their Swagger Back."