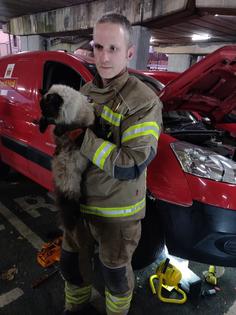 (UPI) Firefighters in Britain rescued a cat that became trapped in the engine compartment of a mail delivery van.

The London Fire Brigade said a Blue watch crew from the Croyden branch responded Tuesday when a cat was found trapped under the hood of a Royal Mail delivery van.

The brigade tweeted a photo showing a firefighter holding the feline after the successful rescue.

The tweet said the cat was turned over to the People's Dispensary for Sick Animals, which was able to reunite the pet with its owner.

(UPI) An Ohio library said a copy of The Voyages of Doctor Dolittle apparently went for a long voyage indeed before being returned to the facility 34 years overdue.

(UPI) A marijuana dispensary in Massachusetts cooked what it claims to be the world's largest cannabis-infused brownie -- an 850-pound THC treat.

MariMed, based in Norwood, celebrated the launch of its new brand Bubby's ...Read More

(UPI) Organizers of a beauty contest for camels in Saudi Arabia said 43 animals have been disqualified for receiving Botox treatments, face lifts and other cosmetic procedures.

Finnebrogue Artisan, based in Downpatrick, County Down, said a team of 10 employees used...Read More

(UPI) A Massachusetts man captured an alligator in the Westfield River after months of sightings.

Jeremy White, of Agawam, said he saw a TV news report Tuesday morning featuring footage of the alligator the day before ...Read More

(UPI) A Maryland woman shopping for lottery tickets on her sister's birthday selected a scratch-off from the bin bearing the same number as the special date and won a $50,000 prize.