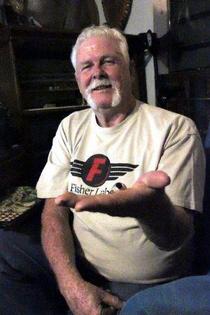 (UPI) A Utah man using his metal detector in the yard of an abandoned home found a class ring that was lost 70 years earlier -- and the owner still is alive.

Kelly Stewart said he was using his metal detector in the yard of the house near his home in Richfield in February 2019, when he found the 10-karat gold Colorado School of Mines class ring from 1943.

"I pulled it out and I started whooping and hollering," Stewart told KSL-TV of the moment he made the discovery.

Stewart said the only clues he had to go on were the name of the school, the year and the initials "R.W.D." engraved inside the band.

The metal detectorist found a Colorado School of Mines 1948 yearbook for sale on eBay and bought it. The tome gave him the name of the ring's likely owner: Richard William Deneke.

Stewart said he spent several months searching the Internet and posting appeals for help to find Deneke's family, and he recently was surprised to learn Deneke is alive and nearing his 100th birthday at a nursing home in Georgia.

"Thank you very much," Deneke told Stewart in a phone call. I think it's amazing.

Deneke said he remembers losing the ring in the 1940s while visiting a home in Richfield.

Stewart said he will return the ring to its owner through the mail.