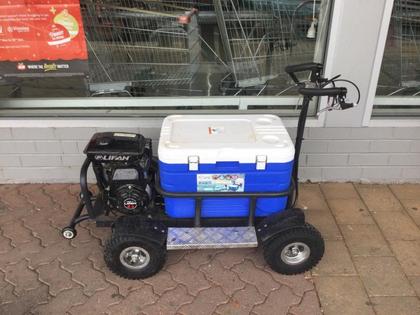 (UPI) Police in Australia said a man was cited for driving without a license and officers confiscated his unusual vehicle -- a motorized cooler.

The Swan Hill Police Service said officers stopped a 25-year-old man, who was spotted driving a motorized cooler on a sidewalk in Kerang, Victoria.

A photo posted to Facebook by police shows a blue cooler on a metal platform with four wheels, an engine, and handlebars arranged to indicate the cooler serves as the small vehicle's seat.

Police also shared a photo of the motorized cooler loaded onto the back of a large tow truck.

Officers said the cooler was impounded for 30 days, and the man was cited for driving without a license.

The Facebook post said the cooler "is considered a vehicle due to the size/engine capacity and must comply with legislative requirements and road rules."