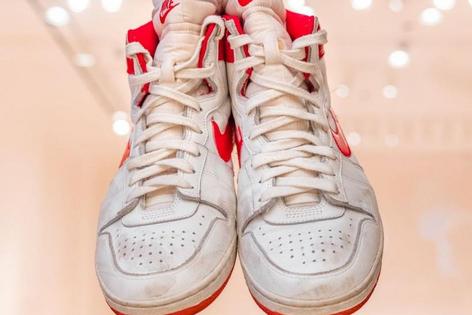 (UPI) A pair of Nike shoes worn by Michael Jordan during his rookie season with the Chicago Bulls sold for a record-breaking $1,47 million at a Las Vegas auction.

Auction house Sotheby's said the white and red Nike Air Ships, which were worn by Jordan during his fifth game with the Bulls in 1984, set a new world record as the most valuable game-worn shoes ever sold from any sport when they fetched the top bid.

The shoes, the first pair created for Jordan by Nike, were autographed by the basketball superstar.

The sale beat the previous record of $615,000, which was set when a pair of shoes worn by Jordan during a 1985 exhibition game were sold by auctioneers Christie's in August 2020.

(UPI) A Massachusetts man who underwent open-heart surgery received a lottery ticket inside a get-well card that earned him a $1 million jackpot.

(UPI) A Michigan high school basketball team's wrong-number mistake in a group text led to the team getting an unexpected video chat session with the Tampa Bay Buccaneers.

Vinny Tartaglia, a player for the Notre Dame ...Read More

(UPI) An Australian family having a picnic in Queensland ended up calling a reptile specialist for help when they returned to their car and found a carpet python hanging off the rearview mirror.

(UPI) Animal rescuers in Iowa helped raccoon spotted atop a fence with a peanut butter jar stuck over its head.

The Animal Rescue League of Iowa said an Animal Services officer was dispatched to the Waveland Tennis Courts...Read More

(UPI) A Louisiana store is pleading for the return of an oversized gummy bear statue that vanished from in front of the business.

Giggles, a children's store in the Willow Grove area of Baton Rouge, said in a Facebook ...Read More