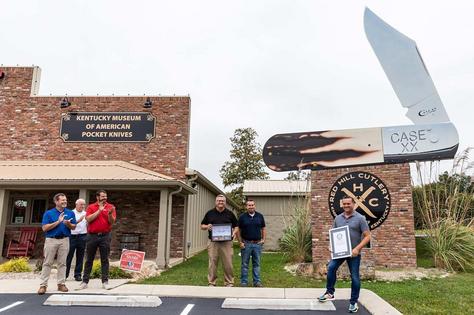 The knife, installed outside Red Hill Cutlery in Radcliff, the home of the Kentucky Museum of American Pocket Knives, was confirmed as the world's largest pocket knife by Guinness, and a ceremony was held Wednesday to commemorate the achievement.

Jason Basham, co-owner of Red Hill Cutlery and the mastermind behind the record attempt, said the hope is that the world's largest pocket knife will serve as a tourist attraction for the museum and the town.

Guinness World Records said the rules required that the folding knife be fully functional. The organization said the knife's creators also took care to ensure it would be able to withstand harsh weather including tornadoes and ice storms.

(UPI) The Missouri State Highway Patrol is reassuring the public that Batman villain Joker is not on the loose after a staff member sent an emergency alert mobile devices.

(UPI) A New Zealand couple who grew what they believe to be the world's largest potato said a sliver of the spud has been sent for DNA testing in their bid to have it declared a Guinness World Record.

(UPI) The California Highway Patrol helped corral an escaped water buffalo that was spotted wandering loose in the middle of a road.

The CHP said an officer responded to the area of North Zediker and Ashlan avenues in ...Read More

(UPI) A teenager participating in a Florida competition broke his own Guinness World Record for fastest time to solve a rotating puzzle cube while blindfolded.

(UPI) Animal rescuers in Arizona came to the assistance of a curious dog that stuck his head through a hole in a cinder block wall and became stuck.

The Arizona Humane Society, which posted video of the rescue to Facebook...Read More

(UPI) A South Carolina man said he left a fast food drive-through line without placing an order when he discovered he had won a $300,000 lottery prize.