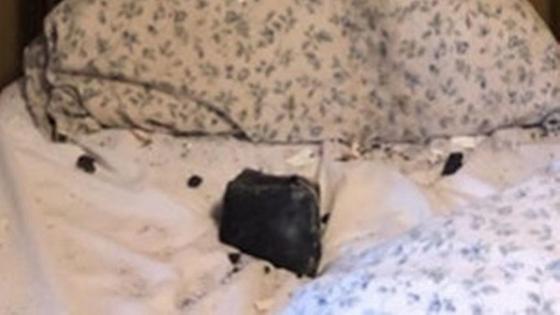 (UPI) A British Columbia woman received an unusual rude awakening when a meteorite crashed through her roof and landed on her pillow.

Ruth Hamilton said she was asleep at her Golden home when she became vaguely aware of her dog barking in the house.

"The next thing was just a huge explosion and debris all over my face," Hamilton told CBC News.

Hamilton said she got out of bed and turned on the lights, revealing something had punched a hole in her ceiling.

"I didn't know what else to do, so I called 911," she said. Talking to the operator, she was asking me all kinds of questions, and at that point, I rolled back one of the two pillows I'd been sleeping on and in between them was the meteorite.

Hamilton said the melon-sized space rock had landed just inches away from her head.

A police officer came to Hamilton's home and they initially suspected the rock may have been the result of construction at the nearby Kicking Horse Canyon.

"We called the Canyon project to see if they were doing any blasting and they weren't, but they did say they had seen a bright light in the sky that had exploded and caused some booms," Hamilton told the Victoria News.

Experts at Western University in London, Ontario, confirmed the rock that landed in Hamilton's bed was a meteorite.

"It's certainly a meteorite," said Peter Brown, a professor with the university's physics and astronomy department. Everything about the story was consistent with a meteorite fall, and the fact that this bright fireball had occurred basically right at the same time made it a pretty overwhelming case.

Brown said his team is planning to examine the rock and determine the type of meteorite. He said it may have fallen from the solar system's main asteroid belt.

Hamilton said the experience has given her a new perspective on life.

"The only other thing I can think of saying is life is precious and it could be gone at any moment even when you think you are safe and secure in your bed," she said. I hope I never ever take it for granted again.

The 19-year-old friends were riding to work together recently and stopped at a ...Read More

(UPI) A group of about 100 hippos, who are descendants of hippos that were owned by late drug lord Pablo Escobar, have been recognized as legal persons in the U.S.

This marks the first time ever that non-human creatures ...Read More

(UPI) A Hong Kong tour company is offering a unique solution to help stressed-out passengers get some rest -- a five-hour bus ride to nowhere.

For those who find they get their most restful sleep to the sounds and motions...Read More

(UPI) A man walking on a beach in Scotland found a message in a bottle and discovered it was the second such message to travel across the Atlantic Ocean from the same man in Canada.