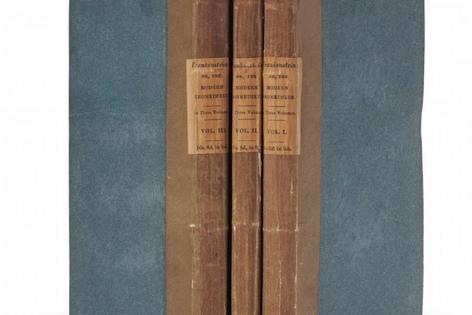 (UPI) A first edition of Mary Shelley's Frankenstein set a new world record for a printed work by a woman when it was auctioned for $1.17 million.

The three-volume copy of Frankenstein, which still bears its original boards from its 1818 printing, had been projected to sell for $200,000 to $300,000 by auction house Christie's, but the sale closed with a top bid many times that estimate.

The sum was reported by Fine Books Magazine to be a new world record for the highest price fetched by a printed work by a woman.

Christie's said the edition was one of only 500 printed in Frankenstein's first run, and the copy sold was the first to be offered for auction since 1985.

(UPI) A Florida charter boat captain said he was just off the coast when he made a rare discovery -- a megalodon tooth measuring more than 6 inches long.

(UPI) The Los Angeles home from the 1984 movie A Nightmare on Elm Street has been listed for sale in time for Halloween with an asking price of $3.5 million.

(UPI) A San Diego angler fishing with friends about 100 miles off the coast came to the rescue of a whale found entangled in a lobster trap.

Matt Capron said he and his friends were on a weekend fishing trip about 100 ...Read More

(UPI) Spanish researchers shared video of a massive sunfish rescued from tuna nets that weighed at least 2,200 pounds -- and might weigh nearly twice that.

Researchers with the Estrecho Marine Biology Station of the ...Read More