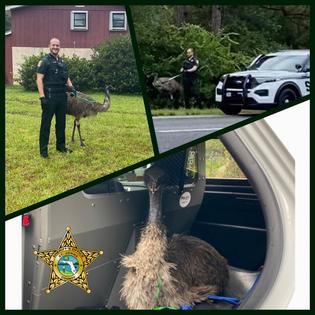 (UPI) A Florida sheriff's office said deputies responded to an "interesting call for service" when an escaped emu wandered into a resident's yard.

The St. Johns County Sheriff's Office said in a Facebook post that "dispatch received an interesting call for service" from a resident who spotted a loose emu wandering in their front yard.

Patrol deputies responded to the scene and were able to safely wrangle the emu and identify the large Australian bird's owner.

"The emu was transported without incident and reunited with his emu family," the post said.

(UPI) A North Carolina truck driver on his way to California found his choice of route to be especially profitable when he won a $1 million lottery jackpot in Tennessee.

(UPI) A Manitoba, Canada, athlete broke a Guinness World Record when he lifted a total of nearly 13,000 pounds over one hour while doing Turkish get-ups.

(UPI) A man who found a 1948 high school class ring while exploring with his metal detector was able to return the ring to the family of the man who lost it 73 years earlier.

(UPI) A New York art collective announced it will be selling 1,000 Andy Warhol sketches for $250 each -- but 999 of them are elaborate forgeries.

(UPI) A group of boaters journeying about a mile off the Florida coast ended up rescuing a lost dog they spotted swimming aimlessly in the ocean.

Bryn Crowell said she and her friends were out on Jakob Dutiot's boat ...Read More

(UPI) A Colorado search and rescue team said a hiker lost on a mountain trail for about 24 hours didn't answer phone calls from the team because they assumed the calls were spam.