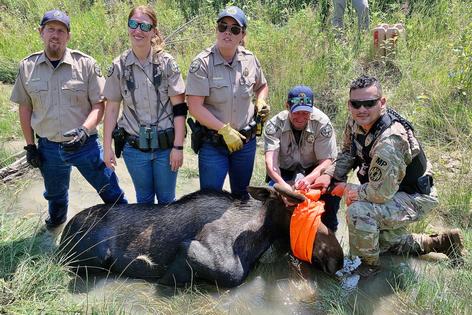 (UPI) Wildlife officials in Colorado said a moose that was spotted wandering on a golf course was captured after making its way to a U.S. Army fort.

Colorado Parks and Wildlife said the moose was first spotted Monday at the Country Club of Colorado, near Cheyenne, and plans were made to relocate the animal to prevent compromising the safety of the moose and human golfers.

Officials said they tracked the moose for four days, until it wandered onto the grounds of Fort Carson. Fort Carson Conservation Law Enforcement officers joined in the efforts to capture the moose and the animal was tranquilized after about five hours of pursuit.

CPW said the tranquilized moose lost consciousness in a creek, so officials worked fast to prevent the 750-pound bull from drowning. Fort Carson Range Control provided a front-end loader and the moose was transported to where it could be transferred to a CPW trailer.

The moose was later released in the mountains.

(UPI) Residents of a small Colorado town are pleading for the return of a stolen phone booth that served as the centerpiece of a public park for decades.

(UPI) A Maryland man who won a $50,000 lottery prize said the winning ticket nearly ended up being thrown in the trash before he realized it was a winner.

(UPI) Police in Colorado said some helpful high schoolers came to the assistance of an animal protection officer when a herd of goats got loose from a city park.

Douglas Smith, 43, of Stanstead Abbotts, England, said he planted his seeds in March, and this month he ...Read More

(UPI) Sheriff's deputies in Florida said it took some "teamwork by land, air and sea" to stop a runaway boat off the coast of a popular beach.