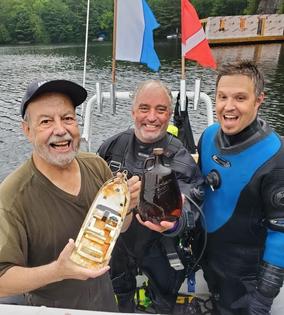 (UPI) A group of treasure hunters searching a Canadian lake were successful in their attempt to find some unusual sunken treasure: a bottle of whiskey that has been in the lake since 1964.

Dieter Mueller of Barrie, Ontario, said he has been fascinated by the tale of Otter Lake's sunken whiskey ever since several bottles were lost when a neighbor crashed his boat into a dock in 1964.

Mueller said he found a stash of underwater bottles while swimming once in the 1960s, but he was unable to reach them, so when he returned to the lake July 15 he brought friend Adam Blokzyl and diving expert Dave Davison to help.

Mueller said the group was getting ready to pack it up for the day when Davison found three bottles underwater, and one was still sealed and intact.

"I was vindicated. We were successful," Mueller told BarrieToday.com.

Mueller said Davison spotted more bottles buried under debris at the bottom of the water and they are planning to return to see if they can find more that remain sealed.

He said the whiskey was produced by the Gooderham & Worts company, which discontinued the spirit in the 1990s.

"Whiskey is usually aged 12 years before it's sold. So this stuff could be 69 years old," he said.

(UPI) An Australian woman who dodged multiple calls from what she suspected to be scammers was shocked when she finally answered the phone and learned she had won a nearly $1.5 million lottery jackpot.

(UPI) A diver searching for treasure at the bottom of a Scottish river recovered an iPhone that turned out to have been dropped by a woman more than a year earlier.

Shane Stephen, who documents the objects he finds during...Read More

(UPI) A bear wandering on the sidewalk in a Tennessee city draw a crowd of onlookers when it darted through a door into an open restaurant.

(UPI) Emergency responders in Florida said they were summoned to an unusual scene where an airborne turtle crashed through a driver's windshield -- and survived.

(UPI) A large pine tree struck by lightning in California was caught on camera as it split in half at the trunk in the aftermath of the strike.

Michael Bogan captured video of the tree on fire near Big Bear Airport after ...Read More

(UPI) Dozens of lifeguards gathered on a California beach to compete for the title of the toughest lifeguard team in Los Angeles County.