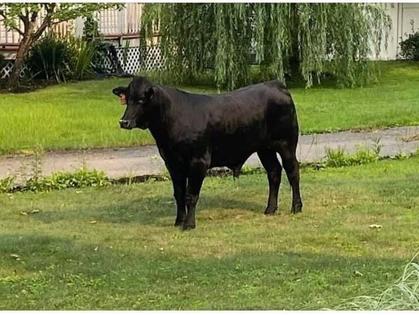 (UPI) Authorities and animal rescue groups in New York are attempting to capture an escaped bull that shut down a stretch of highway Tuesday morning.

The Suffolk County Police Department said officers were dispatched about 8:20 a.m. on a report of a loose bull in Mastic, Long Island.

Police sent out an alert asking residents in the area to remain indoors and report any sightings of the animal to 911.

The bull escaped from a farm by breaking through a fence, police said.

A stretch of Sunrise Highway was shut down near Exit 58 shortly after the first reported bull sightings when the animal wandered into the roadway. The bull left the area, and the highway was reopened after about 20 minutes.

Rescue group Long Island Orchestrating for Nature said in a Facebook post that personnel are working with police to capture the bull safely and find the animal a new home at a sanctuary.

"We are on site looking for the bull and with Jaeger's Run Animal Rescue Inc. who has a tranquilizer gun ready to secure him," the post said.

(UPI) A woman snorkeling in the Cayman Islands said a squid led her to a wedding ring that she was later able to reunite with its owner.

James Ross said he had only been wearing his wedding ring for about six months when ...Read More

(UPI) An Oregon woman's black and tan coonhound earned a Guinness World Record when each of her ears was measured at 12.38 inches long.

(UPI) An Ohio pumpkin festival kicked off with a state record being broken by a giant pumpkin that weighed in at a staggering 2,195 pounds.

(UPI) A Pennsylvania man said his wife dubbed him "the luckiest person she knows" after he collected a $1 million lottery prize just months after winning $100,000.

(UPI) A Florida woman was reunited with her Yorkshire terrier 59 days after the canine went missing thanks to a pet detective.