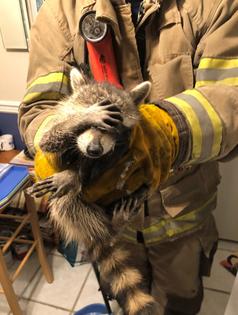 (UPI) Firefighters in Georgia responded to a home where an "embarrassed" raccoon had found its way inside and appeared unable to locate an exit.

The City of Dalton Fire Department said a crew was summoned to a Dalton home Monday on a report of a raccoon that came inside and refused to leave.

"We were called out to help this guy find his way back out of a house in Dalton Monday night," the department said in a Facebook post.

The post included a photo of the raccoon using a paw to cover its face in a gesture reminiscent of embarrassment.

"As you can tell, he was pretty embarrassed about it, but it's really nothing to be ashamed of. We all need a helping hand every now and then," firefighters wrote.

The raccoon was safely released outside the home, the post said.

(UPI) A Maryland who called himself "Touchdown Joe" won a $100,000 top prize in the state's new Ravens X5 scratch-off game.

The 57-year-old Silver Spring man purchased the $5 ticket at an Annapolis Wawa, where he and his ...Read More

Public Works Department employee Brian Townsend saw the snake on a sidewalk between Buddy Attick Park and the ...Read More

(UPI) A South Carolina beachgoer had a once-in-a-lifetime encounter when she picked up a shell and found an octopus nestled inside.

Lori McGee was walking on the Isle of Palms when she picked up a whelk shell and checked ...Read More

(UPI) Suriname Vice President Ronnie Brunswijk, 60, became the oldest player in history to play in an international club soccer game when he appeared in a CONCACAF League match in Paramaribo, Suriname.