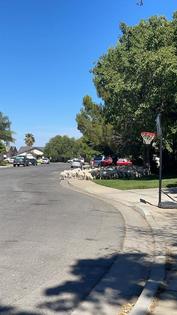 (UPI) Residents of a California neighborhood were surprised to look outside their homes and discover a flock of dozens of sheep wandering loose in the streets.

Jelisa Silvaa captured video Tuesday afternoon when the massive flock of sheep paraded through the streets of her Coalinga neighborhood around 4:30 p.m.

Residents said the sheep were seen spread out on three separate streets in the Sandlewood area.

Police and animal control were summoned to the scene, and neighbors said a sheepdog was seen moments later with a person on an ATV guiding the sheep back to the nearby field they had apparently escaped from earlier.