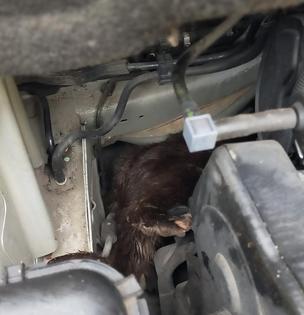 (UPI) Animal rescuers in Scotland responded to a "very unusual" situation when a resident discovered an otter was hiding in the engine compartment under the hood of their car.

The Scottish SPCA said rescuers responded to a vehicle parked near a pond in Edinburgh after the owner reported an otter had fled under the car and made its way up into the engine compartment.

"The poor otter was spooked by the residents, and it is likely that he used it as a shelter to hide," the SSPA said in a Facebook post.

The rescuers opened up the hood of the car to extract the otter, but the animal, apparently spooked by its would-be helpers, wriggled free of the vehicle's engine and ran off without assistance.

The post said the rescuers were "unable to give him a thorough check over, but it is unlikely he was injured as there is no way he could have made his getaway if he was!"

(UPI) A Michigan woman who decided to try the state lottery's KENO! game for the first time had a brush with beginner's luck and collected a $250,000 jackpot.

(UPI) A British Columbia crew cleaning up plastic waste on the coast found a message in a bottle tossed into the ocean by a Washington state teenager nine years earlier.

Jeff Ignace, a member of the provincial government-...Read More

(UPI) A library in England said a book was recently returned in the mail after 63 years with a note saying, "better late than never."

Newcastle Libraries shared a photo on Facebook showing the copy of Darrell Huff's How ...Read More

(UPI) A Tennessee mall shared videos of a young black bear that paid a visit to the shopping center was filmed apparently trying to find a way into a movie theater.

(UPI) Ernest Hemingway look-alikes are gathering in Florida to celebrate the life of the famed author and crown a champion impersonator.