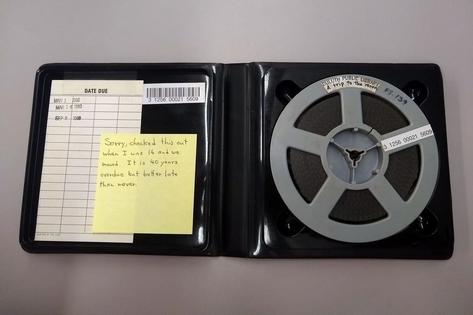 (UPI) Employees at a Minnesota library found an unusual item in a return bin -- an 8mm film that was 40 years overdue.

Dan Buckanaga, an employee at the Duluth Public Library, said he was emptying a return bin when he spotted what he initially thought was a CD audiobook, but a closer examination revealed to be an 8mm movie on a reel.

"I'd never seen one before," Buckanaga told the Duluth News Tribune.

The film reel, a copy of classic silent film A Trip to the Moon, was accompanied by a Post-it note reading: "Sorry, checked this out when I was 14 and we moved. It is 40 years overdue but better late than never."

Randall Brody, 54, came forward as the man who returned the film. He said he found it in a box in his garage earlier this year and remembered he and his brother had checked it out of the library Sept. 2, 1980, shortly before their family moved to North Dakota.

"At first, I didn't know what to do with it, thinking they don't even want it back. ... It might have some value, maybe for a collector," Brody said.

Brody offered to pay a late fee to the library, but Byron Johnson said the facility did away with overdue fines about a year and a half ago.

Johnson said the library no longer as the means to test whether the film is still watchable, as the old projection room was long ago transformed into a set of bathrooms. He said the film will likely find a new home in his personal "museum" on his desk.

(UPI) A Virginia woman ended up getting lucky twice over when she lost her $250,000 winning lottery ticket and found it in time to claim the prize.

(UPI) A group of paddlers seeking the Guinness World Record for fastest canoe trip down the Mississippi River said they are ahead of schedule, despite delays from a bridge shutdown.

A spokesman for the Mississippi Speed ...Read More

(UPI) Sheriff's deputies in Florida responded to a Wendy's restaurant to relocate a "hangry" alligator that chased customers through the parking lot.

(UPI) A British beverage company is seeking an "official cocktail tester" to get paid more than $280 to spend a year drinking free cocktails.

(UPI) An employee at a Kentucky grocery store picked up what he thought was a piece of trash on the floor and discovered it was a $1,000 money order.

Terry Rush, a greeter who has worked at the Dixie Highway Kroger store ...Read More

(UPI) A cyclist attempting to snap a selfie in the background of a live news broadcast on MSNBC ended up wiping out on national TV.

MSNBC reporter Guad Venegas was delivering a live report on COVID-19 guidelines from a ...Read More