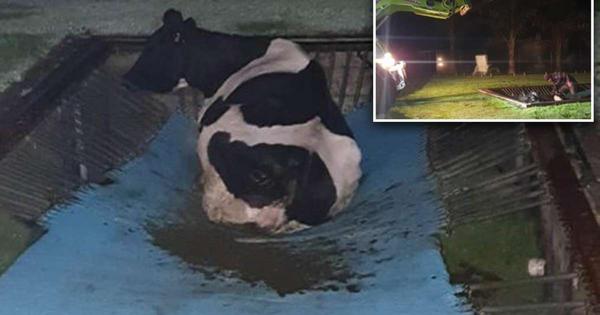 (UPI) One of about 40 cows that escaped from a farm in Victoria, Australia, was found less than a mile away after wandering onto a resident's trampoline and becoming stuck.

Kay Laing South Gippsland said she spotted the cow on the trampoline outside her home Wednesday night and discovered the bovine was unable to stand up on the bouncy surface.

Laing said a neighbor used a tractor to carefully lift the animal off the trampoline and contacted the cow's owner.

The animal's owner said about 40 cows had escaped earlier in the evening and the majority had been rounded up before the trampoline discovery.

(UPI) A woman snorkeling in the Cayman Islands said a squid led her to a wedding ring that she was later able to reunite with its owner.

James Ross said he had only been wearing his wedding ring for about six months when ...Read More

(UPI) An Oregon woman's black and tan coonhound earned a Guinness World Record when each of her ears was measured at 12.38 inches long.

(UPI) An Ohio pumpkin festival kicked off with a state record being broken by a giant pumpkin that weighed in at a staggering 2,195 pounds.

(UPI) A Pennsylvania man said his wife dubbed him "the luckiest person she knows" after he collected a $1 million lottery prize just months after winning $100,000.

(UPI) A Florida woman was reunited with her Yorkshire terrier 59 days after the canine went missing thanks to a pet detective.