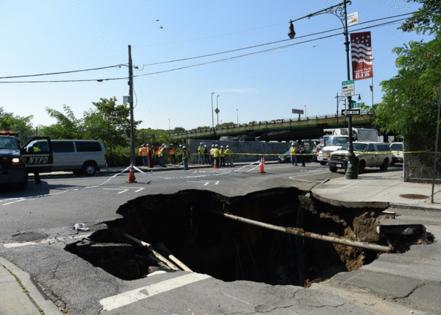 Is your neighborhood at risk of sinkhole damage? You might be surprised ...

The thought of a giant hole splitting open the ground without warning seems like it should only exist in movies, but sinkholes are an increasingly common phenomenon with grave consequences.

On July 18, 2022, a massive sinkhole opened in the Bronx, gobbling up a van and a significant amount of the road. In Winston-Salem, North Carolina, a woman fell into a sinkhole that opened up in the lot of a used car dealership on Sept. 15, 2022. Luckily she had only minor injuries, despite multiple cars falling in with her. A van drove into a sinkhole in the middle of the street in Evansville, Indiana, just a day later. A water main break, which was in the process of being repaired, caused the sinkhole.

In light of recent sinkhole occurrences across the U.S., Stacker investigated some of the primary risk factors for sinkholes and where those factors may be present using information from the U.S. Geological Survey and other scientific sources.

There are multiple ways sinkholes can form, but the three main categories are dissolution sinkholes, cover-subsidence sinkholes, and cover-collapse sinkholes. All three types of sinkholes require the movement of significant amounts of soil or bedrock to make a hole in the ground.

Dissolution sinkholes happen when the bedrock underneath the ground is dissolved by rain or other water, washing away the foundation supporting the ground and resulting in a dip in the surface. Cover-subsidence sinkholes occur when large amounts of sediment move to fill in a cavern or crack beneath the surface, forming a similar dip. Cover-collapse sinkholes are similar, but instead of the surface of the ground moving as the sediment wears away, it preserves a thin layer of earth and eventually collapses under pressure.

Read on to learn about the science behind sinkholes. 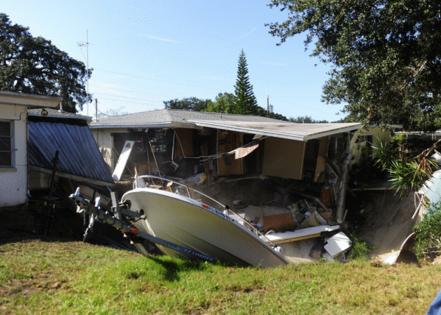 Carbonate bedrock, which is usually limestone but can also be dolostone, is relativelyfragile compared to other rock types. It is a sedimentary rock formed by many layers of tiny rock and mineral particles compressed over time. As a result, carbonate easily erodes when permeated with water and can leave caverns of open space underneath the surface. Sinkholes form when the surface caves to fill in the space below.

As the most common bedrock risk factor in the U.S., you can find carbonate bedrock in vast swaths across the Southeast, Midwest, and even the Mountain West. Sinkhole hotspots attributed to carbonate bedrock have been identified in more than half of U.S. states but are mainly concentrated in Appalachia and Florida. 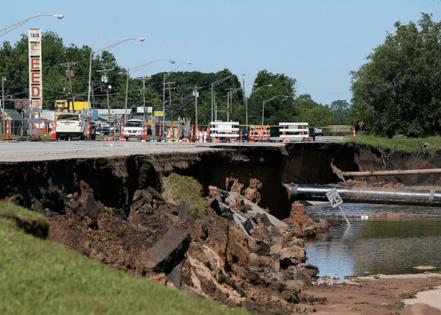 Evaporite bedrock is similar to carbonate bedrock because it is a layer-based sedimentary rock. However, instead of forming due to rock and minerals deposited over time, evaporite is formed when water evaporates without being replaced by rainfall or other means, leaving behind layers of minerals previously dissolved in the water.

Because those minerals are, by definition, water-soluble, they are easily washed away by rain and other water runoff, creating underground spaces that can cave in or collapse. The most common types of evaporite in bedrock are salt and gypsum.

Large deposits of evaporite bedrock exist in Michigan, Texas, and Oklahoma, as well as various other Midwest and Mountain West states. Hotspots of sinkholes caused by evaporite bedrock primarily exist in northern Texas and western Oklahoma. 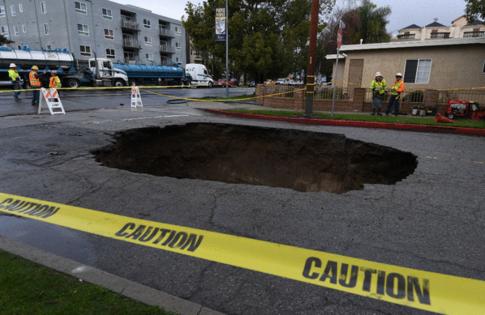 Unlike carbonate and evaporite bedrock, volcanic bedrock is not water-soluble or easily eroded. Though volcanic bedrock is quite strong because it is an igneous rock formed directly from cooling lava, it is also susceptible to developing lava tubes. These lava tubes are large open spaces in the rock created when the lava flow cools unevenly. Significant or prolonged pressure to the tops of the open tubes can cause them to collapse and form a sinkhole.

Volcanic rock is the least common bedrock risk factor in the U.S. Most impacted areas are near the West Coast and Southwest. Washington, Oregon, California, and Idaho all have sinkhole hotspots associated with volcanic bedrock. 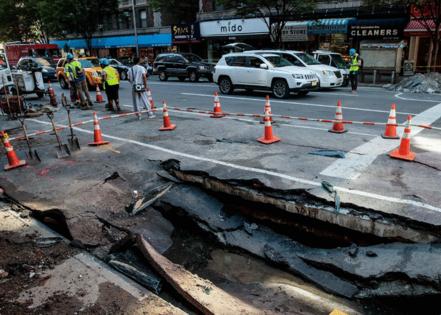 Though the composition of bedrock is one of the primary risk factors associated with sinkholes, other environmental characteristics can also contribute. Areas situated close to tectonic fault lines or the place where two pieces of the Earth's crust meet can be more likely to experience sinkholes due to the constantly shifting ground. In addition, human-induced sinkholes can occur when groundwater is disturbed or when irrigation redistributes the flow of water.