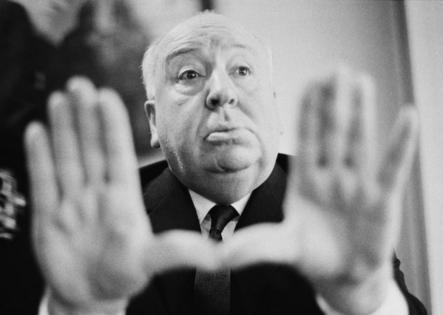 Alfred Hitchcock: The life story you may not know

No one comes close to rivaling Sir Alfred Hitchcock in the cinematic world of thrills and suspense. For decades, he kept audiences at the edge of their seats, eyes glued to the screen as innocent men were unjustly accused of crimes, unwitting bystanders were entangled in nets of intrigue, and lovers grew suspicious of one another's intentions.

Stacker put together a list of 25 facts about the life of Hitchcock you may not know, drawing from specialized film channels, movie archives, historical accounts, critic reviews, and education resources.

From common roots in London, Hitchcock studied engineering and art and learned his way around a movie studio. His debut behind the camera as a director took place before movies had sound. He was a pioneer in cinematic techniques, perfecting the use of shadow and light and steering the camera in pans and close-ups to propel the plot. He invented the  use of what's called the zoom dolly in the film "Vertigo," having the camera zoom into a scene as it simultaneously dollies out.

His storytelling was peerless, as he spun sagas of suspicion, paranoia, mistaken identity, and the fateful meeting of strangers in films. The best actors of the times brought his drama to life, and his influence to this day on the cinematic arts is unmeasurable. 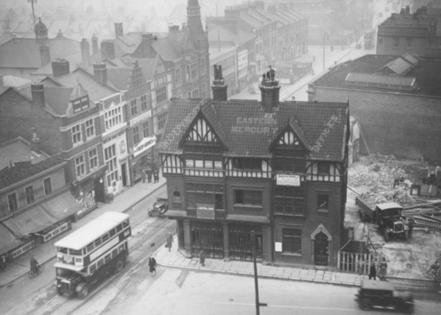 Alfred Joseph Hitchcock was born on Aug. 13, 1899, in Leytonstone, England. He was the youngest of three children. His parents were half English and half Irish, and his father was a greengrocer who died when Hitchcock was 14. 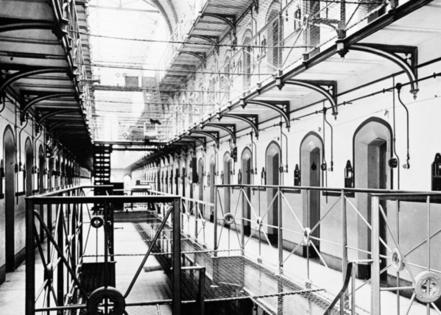 1900s: Discipline and a lonely childhood

Hitchcock's parents were strict disciplinarians. His father was known to have sent him for punishment to be locked up at the local jail. He is also said to have had a lonely childhood, due partly to being overweight. 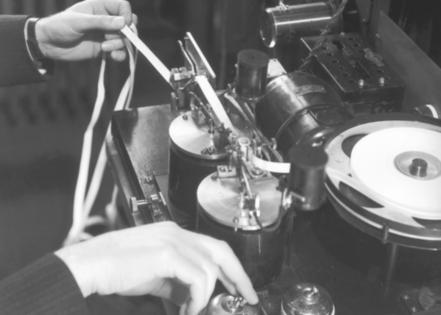 Hitchcock attended the Jesuit St. Ignatius College in London and London's School of Engineering and Navigation, and he also studied art at University of London. He got a job as a draftsman at W.T. Henley's Telegraph Works Co., where he wrote short stories for an in-house company magazine. 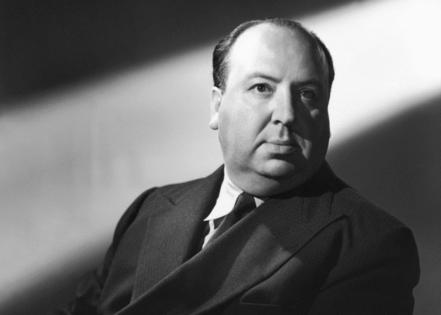 Hitchcock started in filmmaking in 1920 when he got a job in London illustrating title cards for silent movies at Paramount Pictures' Famous Players-Lasky studio. He rose in the ranks and in 1922, he directed a short film, "No. 13/Mrs. Peabody," which was never finished. In 1925, he directed "The Pleasure Garden," his first full-length film about adultery and murder. 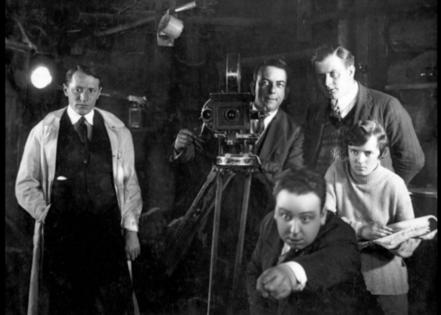 In 1925, Hitchcock directed a silent comedy titled "The Mountain Eagle/Fear o' God," set in Kentucky. All prints of the film have disappeared, and little evidence remains except for a few production photos. Hitchcock didn't mind the loss, apparently, having been quoted as calling it "a very bad movie." 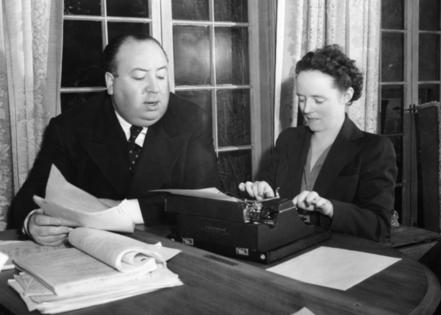 In 1926, Hitchcock married Alma Lucy Reville, who was a film editor at the Famous Players-Lasky studio, a subsidiary of Paramount Pictures. She became a close collaborator with her husband, and she worked as a script supervisor, writer, editor, casting consultant, and assistant director on many of his films. She is considered responsible for Hitchcock choosing the distinctive score by composer Bernard Herrmann for the shower scene in "Psycho." 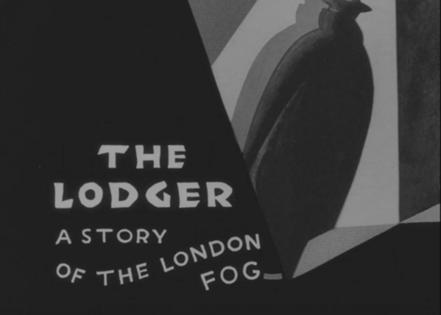 1926: An early take on mistaken identity, an innocent accused

Hitchcock's breakthrough film in the silent era was "The Lodger," made in 1926. In a storyline that heralded those of his later films, the movie's plot revolved around an innocent man on the run after being wrongly suspected of being Jack the Ripper. 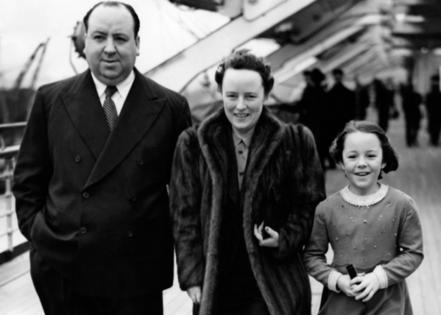 Hitchcock's only child, daughter Patricia Hitchcock O'Connell, was born in 1928. She grew up to become an actor, appearing in three of her father's films: "Stage Fright," "Strangers on a Train," and "Psycho." 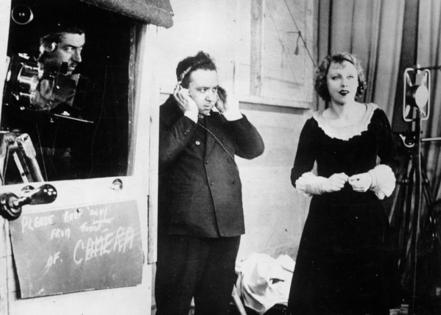 Hitchcock's first talking movie was 1929's "Blackmail," in which a woman fatally stabs an artist who tries to seduce her. The director highlighted the character's fears by distorting dialogue she can hear following the murder so that the only clear word is "knife." In 1930, he made "Murder," uniquely recording character thoughts on the movie's soundtrack. 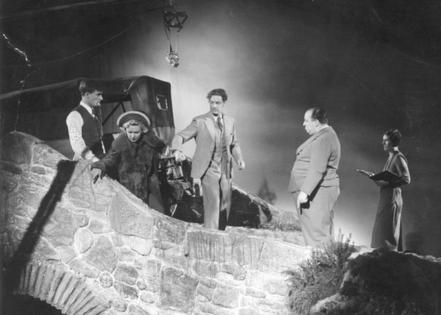 One of Hitchcock's most acclaimed films, "The 39 Steps," was made in 1935. It introduced audiences to Hitchcock's signature concept of a MacGuffin, a device or object that propels the plot, yet it's not particularly important to the audience immediately. In "The 39 Steps," the MacGuffin is the plan for an airplane engine. 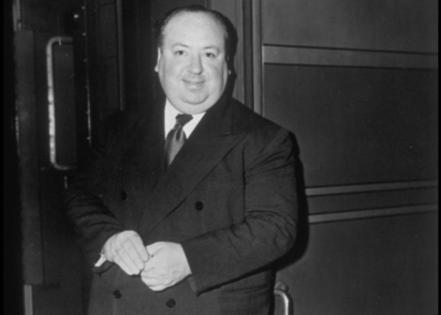 The director was known for pulling practical jokes on set, some as basic as hiding whoopee cushions under people's chairs. During the filming of "The 39 Steps," Hitchcock put the two lead actors together in handcuffs and pretended to have lost the key. Some of his jokes were considered quite unkind, such as sending boxes of mice or spiders to people he knew had a great fear of them. 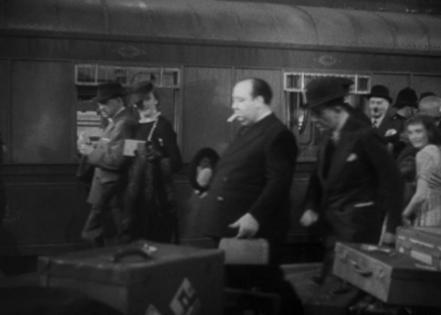 Hitchcock had a big success on his hands with "The Lady Vanishes" in 1938 about a mysterious disappearance on board a train. The movie was the first in which Hitchcock made one of what would become his signature cameo appearances. He played a man in a London rail station walking along a train platform. 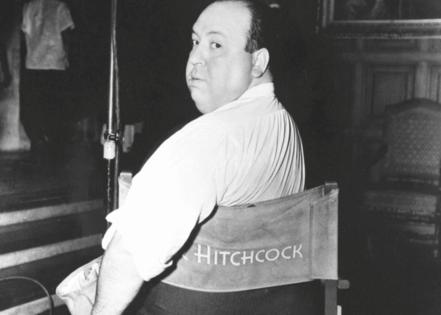 The year 1940 saw Hitchcock make his American debut, after signing a seven-year contract with Hollywood producer David. O. Selznick, with the gothic drama "Rebecca." It starred Joan Fontaine and Laurence Olivier. It was nominated for 11 Academy Awards and won for best picture. 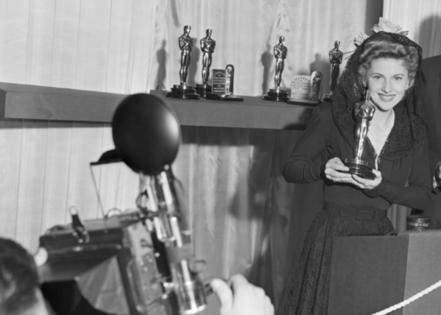 The 1941 film "Suspicion" by Hitchcock earned a best actress Oscar for Joan Fontaine, who appeared as a wealthy socialite who falls under the seductive spell of Cary Grant. She would be the only actor ever to win an Academy Award for her work with the director. 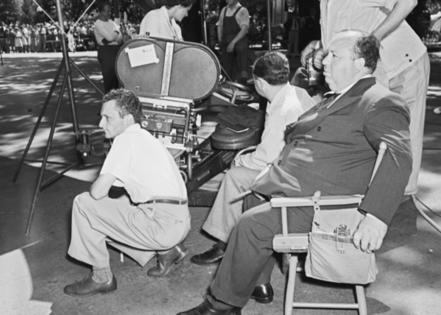 The early 1940s had the director making his first comedy, "Mr. and Mrs. Smith," only to work with Carole Lombard; "Saboteur," in which Robert Cummings played an aircraft plant worker targeted by Nazi spies; and the dark "Shadow of a Doubt" about a suspected serial killer. In 1944, he directed "Lifeboat," in which a group of survivors—among them Tallulah Bankhead and William Bendix—are stranded following a U-boat attack. Hitchcock earned the second of his best director Oscar nominations for his work on the film. 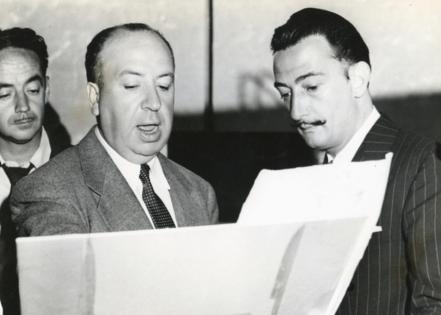 1945: Some help from Salvador Dalí

During the filming of "Spellbound" in 1945, Hitchcock frequently clashed with producer David O. Selznick. The film starred Ingrid Bergman as a psychoanalyst who falls for an amnesiac, played by Gregory Peck, who may be a murderer. A well-known dream sequence in the film was designed by surrealist artist Salvador Dalí. 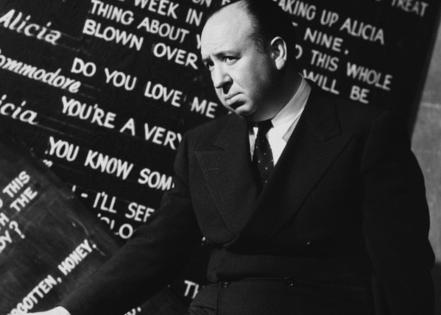 During World War II, Hitchcock helped the Allied effort by making propaganda films. He shot two short pieces for the British Ministry of Information about resistance fighters in France and helped compile footage of concentration camps for a documentary titled "Memory of the Camps." Shelved by the British government due to its feared potential impact on morale, it was not released until the 1980s. 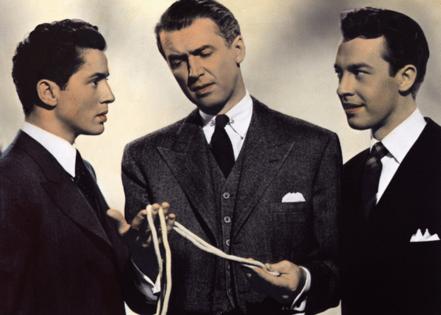 The first color film made by Hitchcock was "Rope" in 1948, in which what appears to be one continuous take in the movie is actually an editing feat joining several shots together. It was Hitchcock's first time working with James Stewart, who would become his favorite actor. In "Rope," Stewart plays a philosophy professor who starts to suspect two of his students of committing a murder. 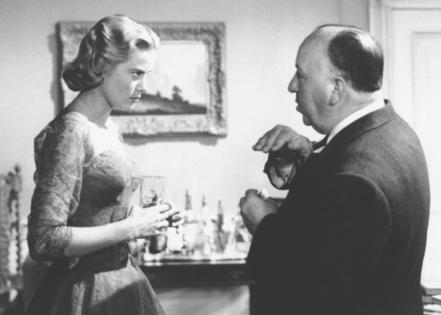 1950s: Masterpieces with a soon-to-be princess

Hitchcock made a trio of masterpieces in the 1950s, all of them with Grace Kelly as the starring actor. "Dial M for Murder" and "Rear Window" were made in 1954 and "To Catch a Thief " a year later. That same year, 1955, Kelly met Prince Rainier of Monaco, whom she would marry to become princess of the tiny European principality. 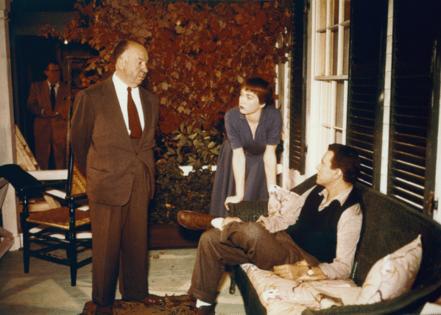 1955: An American and another comic step

Maintaining his British citizenship, Hitchcock also became an American citizen in 1955. That same year, the king of suspense made his second comedy, "The Trouble With Harry." It starred Shirley MacLaine and Jerry Mathers. Two years later, Mathers made his debut in the title role of the television show "Leave It to Beaver." 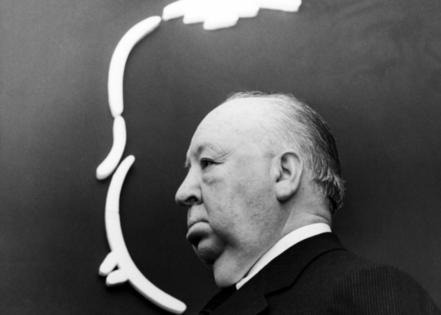 The director became an even bigger celebrity in 1955 when his series "Alfred Hitchcock Presents" made its debut on CBS television, where it would air for a decade. A drawing of Hitchcock used in the opening sequence was his own creation. He began each show with the slightly ominous greeting, "Good evening." 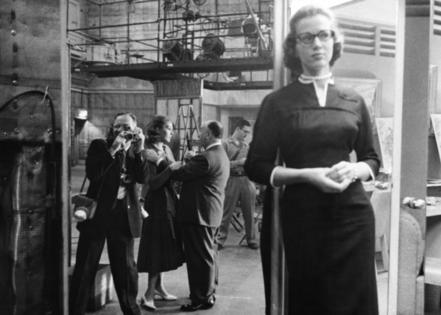 The 1958 movie "Vertigo" featured James Stewart as a private investigator with a debilitating fear of heights; the film also starred Kim Novak. Neither critics nor audiences took to the thriller movie initially, and only in later years did it become recognized as one of his best works. 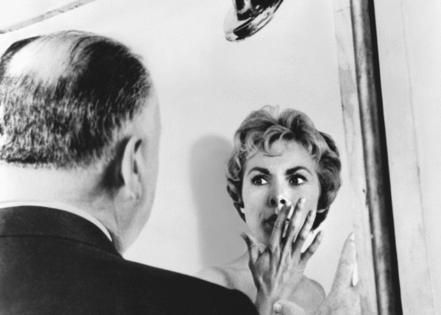 1960: Preserving the secrets of 'Psycho'

Hitchcock's most commercially successful movie was the 1960 shocker "Psycho." The director took extensive measures to keep the movie's plot and ending a secret. He made the cast and crew take oaths not to tell, and newspaper ads for the movie asked audiences not to spoil the ending for others. Hitchcock also fought with censors, submitting graphic scenes of violence and nudity as a distraction so that he could keep more nuanced shots in the film. 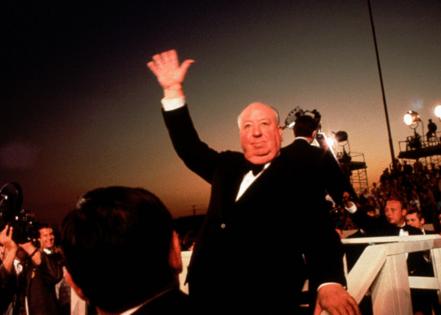 Throughout Hitchcock's career, his films received 46 Oscar nominations and six wins. He never won an Oscar for his directing, although he was nominated five times—for "Rebecca," "Lifeboat," "Spellbound," "Rear Window," and "Psycho." He was awarded an honorary lifetime achievement Oscar in 1967, and his famous acceptance speech consisted of the words: "Thank you … very much indeed." He was also knighted by Queen Elizabeth II in 1980. 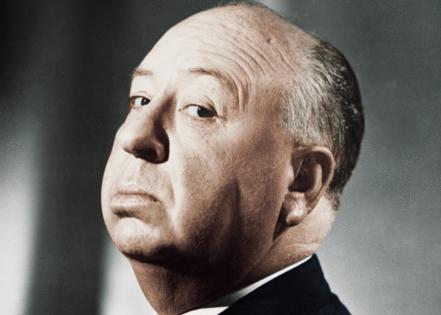 Hitchcock suffered kidney failure and died at home in Bel Air, Los Angeles, on April 29, 1980. He was 80 years old. His funeral was held in Beverly Hills at the Church of Good Shepherd. His body was cremated, and his ashes were scattered in the Pacific Ocean.

Since the beginning of the COVID-19 pandemic, the number of employees working remotely has increased across the U.S. According to Ladders, only 4% of jobs with North America's largest employers were remote prior to the ...Read More

For 50 years, the U.S. Consumer Product Safety Commission has been working to decrease preventable injuries and deaths related to consumer products. The agency does this by enforcing product standards, assessing possible ...Read More

The COVID-19 pandemic caused massive disruptions to numerous industries, among them the movie business. In the pandemic's early days, studios and movie theaters were hit with temporary closures, filming delays, and ...Read More

The last decade saw celebrities throwing some pretty extravagant soirees, from whisking friends off to India on private jets to half-million-dollar spends for an iconic singer's performance at a boyfriend's birthday ...Read More