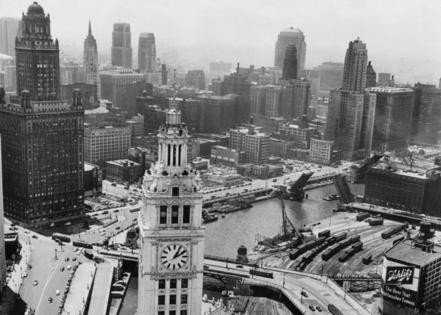 The largest city in the Midwest, and the third most populous in the country, Chicago is a beacon of culture and commerce in the nation's flatlands. In 1950, 3.6 million people—or 2% of the nation's population—called the Windy City home. Unfortunately, as is the case for many of America's biggest cities, suburbanization had a decidedly negative effect on it, and by the end of the decade, Chicago was facing a steep decline in population and prosperity.

Toward the end of the 1950s, many of the city's biggest industries, like meatpacking and steel, began withdrawing from the urban center, searching for cheaper places to set up shop. This meant that many of the related factories shut down, which meant jobs went, money went, and single-family homes—the dream of many Americans—went as well. As a result, wealthier residents, with the means to relocate, left the city, as did their tax dollars. Crime rose and the ability to fight it went down. In the '60s and '70s, Chicago wasn't the nice, family-oriented place it had been in previous decades.

That being said, the early part of the 1950s was a bit of a golden era for Chicago. The economy was thriving, both foreign and domestic immigrants were moving in at a rapid pace, which allowed for a rich and diverse culture, and the city was growing up—literally. New high-rises dotted the skyline regularly.

It's hard to describe exactly what life was like in Chicago during the 1950s using words alone, so Giggster combed the historical archives to compile a list of pictures of life in the city during the decade to give you a better idea. From daily activities like eating out to historical events like the 1959 steel strike, these photos are sure to transport you to another time. 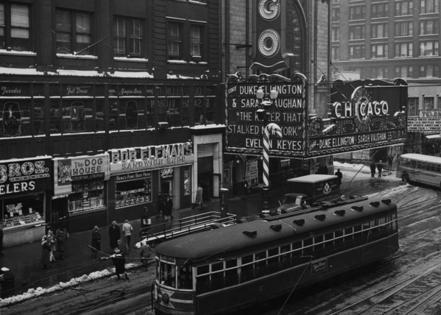 The first large and lavish movie palace in the country, the Chicago Theater is one of the city's most notable historical landmarks. In the 1950s, the theater's owners, facing a downturn in fortunes, covered up much of the building's original ornate architecture in an attempt to make it look more modern and appealing to audiences. 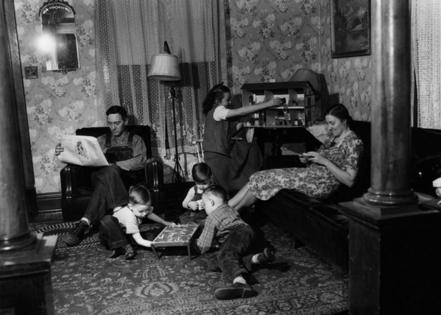 A Goldblatt's man at home

A family relaxed in their Chicago apartment. According to the archives, the man worked at Goldblatt's, a Chicago-based chain of department stores that featured upscale merchandise as well as bargain basements for shoppers of various economic levels. 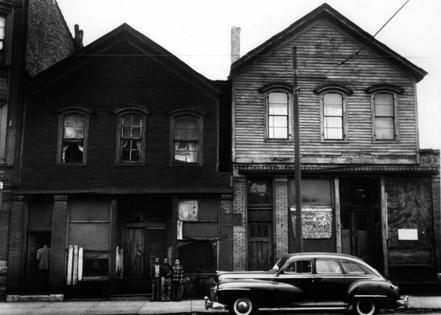 Three children stand in front of two homes built in the workers cottage style, the original Chicago home style. One of the homes is primarily wood-sided, which likely means it was built before the Great Chicago Fire of 1871. 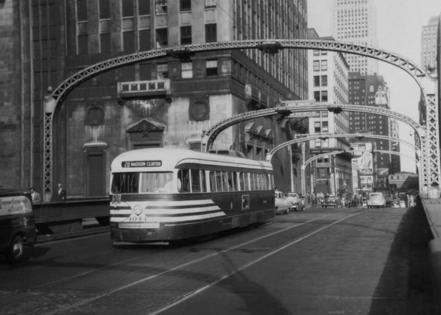 The end of an era

The 1950s marked the end of Chicago's streetcar era. At one point, the city had the largest streetcar system in the world, but by 1958 the streetcars were gone, replaced by buses; the elevated train system—or better-known as the "L"—and private automobiles. 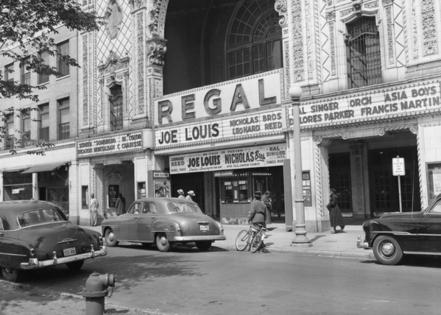 A cultural mainstay for Chicago's Black community, the Regal Theater, located in the Bronzeville neighborhood, was part nightclub, part movie theater, part stage theater, and part music venue. Some of the culture's biggest stars, from Nat King Cole to Ella Fitzgerald, performed here before it was razed in the early '70s. 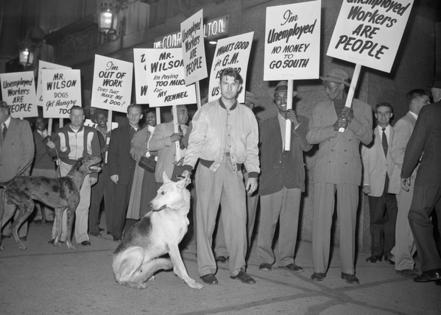 A group of protesters gathered outside a Chicago hotel to picket against Charles E. Wilson, former secretary of defense, who spoke at a dinner that was held at the hotel. Wilson had previously made disparaging comments about unemployed people. 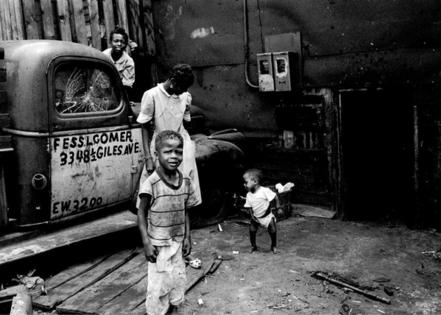 From the 1920s and into the 1950s, the seven-mile long area from 22nd to 63rd streets between State Street and Cottage Grove Avenue, known as Bronzeville, was the center of Black life in Chicago, and in 1954 it had one of the highest concentrations of Black businesses and culture in the country. Middle- and upper-class families left the area once housing was no longer racially restricted, and the overcrowded and poverty-stricken areas caused a decline of the neighborhood's living conditions. 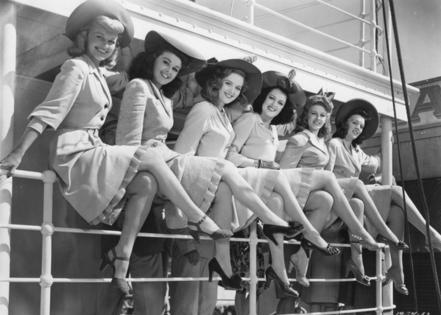 A group of young women from the Chicago-based Hanover Models Agency exemplified the high fashion sense of the day, posing on an outdoor railing. 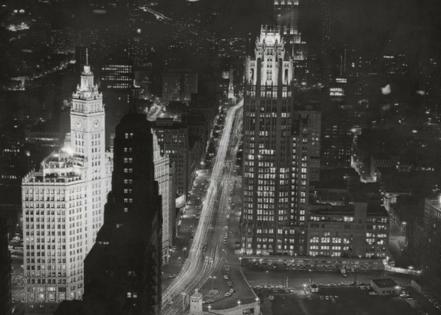 In this night shot of Chicago's Michigan Avenue business district, the Wrigley Building with its well-known clock tower was lit up on the left, mirrored by the Gothic Revival-style Tribune Tower on the right. 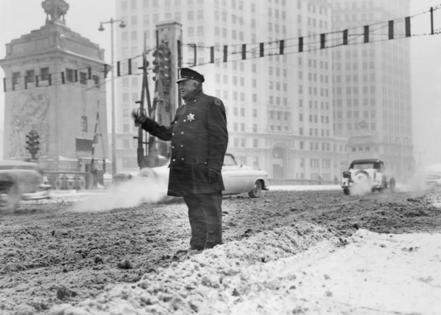 Known for its bone-chilling winters, Chicago experienced 26.3 inches of snowfall in the winter of 1955. A policeman reminded drivers to move slowly lest they spin out in the snowy traffic. 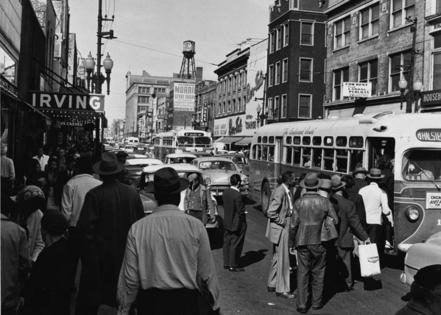 One of Chicago's most vibrant and unconventional business and residential districts, Maxwell Street was home to one of the city's biggest immigrant communities in the 1950s. Eastern European Jews, Germans, Irish, Poles, Mexicans, Koreans, Southern Blacks, and Bohemians all lived along the mile-long thoroughfare, many operating sidewalk stands that sold everything from shoelaces to food to clothing. 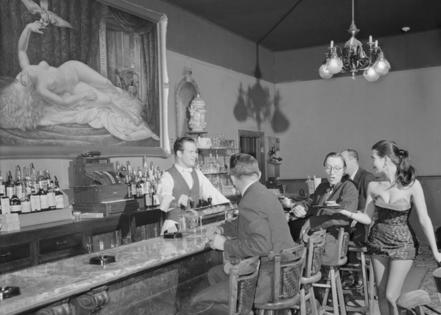 A waitress delivers another round of drinks to patrons at Chicago's Rush Street Gaslight Club, a members-only club that required a key for entrance. A precursor to the Playboy Club, the Gaslight featured models and waitresses in skimpy outfits who performed song and dance routines between serving drinks.

Following the polio epidemic of 1952, the worst in the nation's history, a Chicago public school offered free vaccines to children. Of all of polio's victims, children were the most vulnerable to mild to disabling paralysis. 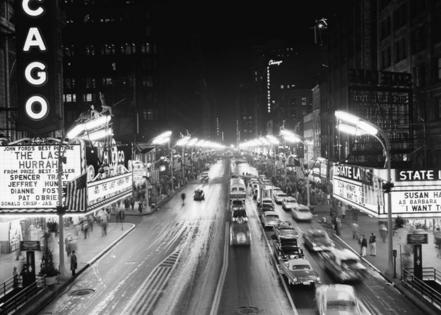 Patrons wander in and out of movie theaters in Chicago's Loop on a holiday evening—notice the elves teetering on the streetlights to the delight of visitors. The area earned its name because of the elevated train system that encircles the downtown business and financial district of the city. 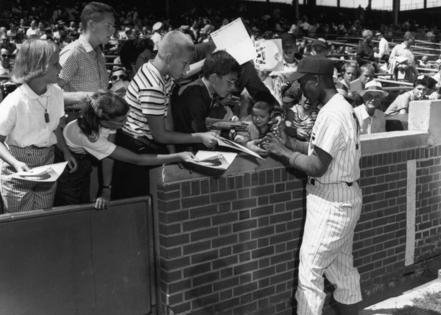 Ernie Banks, the Chicago Cubs' first Black player and the National League's MVP in 1958 and 1959, signed autographs for young fans before a game. "Mr. Cub" played shortstop and first base for the team from 1953 through 1971. 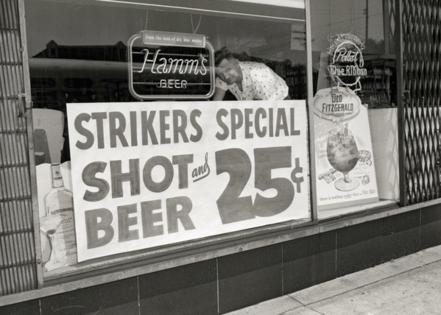 Preparing for a strike

In July 1959, 500,000 union members of the United Steelworkers of America, including 90,000 in the Chicago area, went on strike. Their 116-day work stoppage was among one of the longest in the history of the United States. On Chicago's South Side, a tavern advertised its "Strikers Special," perhaps hoping to drum up a little extra business during the crisis. 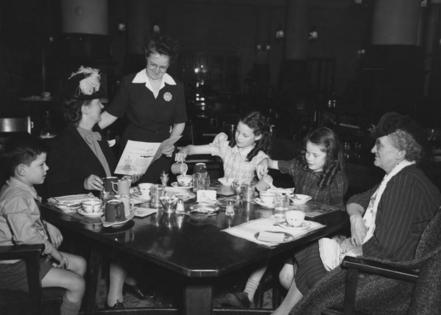 Not the typical family meal at the kitchen table, three generations enjoy a meal out at a restaurant. Many, such as The Berghoff Restaurant or The Walnut Room, were staples of better dining for families in downtown Chicago. 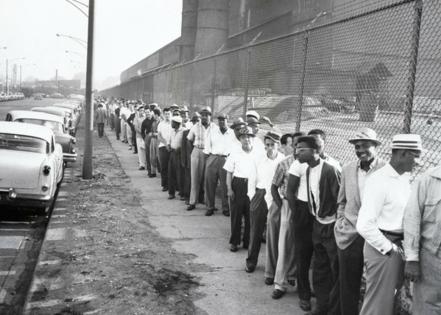 Hundreds of United Steelworker of America employees at the South Works of the United States Steel Co. in Chicago lined up to receive their last pre-strike paychecks in mid-July 1959. They did not return to work for more than 100 days. 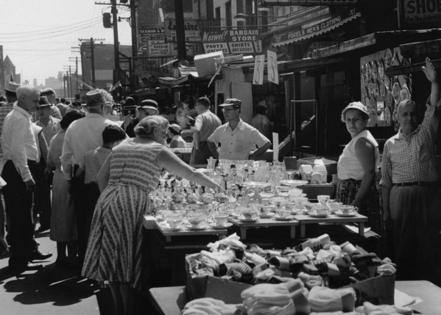 A precursor to the flea markets that exist in Chicago today, the Maxwell Street market was a Sundays-only affair started by Eastern European Jewish immigrants in the late 19th century. Tables that crowded the sidewalks each weekend sold things like glassware, socks, and fresh food. 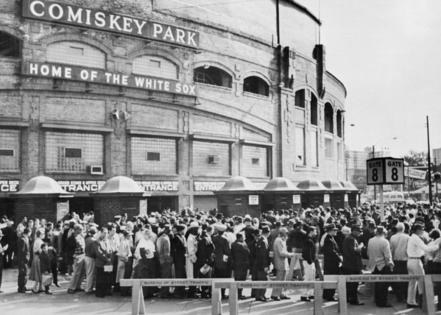 Chicago's other baseball team, the White Sox, made it to the World Series in 1959. Fans lined up outside of Comiskey Park ahead of the first game against the Los Angeles Dodgers. The Dodgers took the series 4-2 at Comiskey Park in the end.

Certain city and government leaders have long-realized positive impacts art and other forms of creative expression can have on communities.

In Atlanta, filmmakers are provided with lucrative tax incentives to work ...Read More

The thought of a giant hole splitting open the ground without warning seems like it should only exist in movies, but sinkholes are an increasingly common phenomenon with grave consequences.

Before computers and algorithms were developed to generate random numbers, there were dice. Middle Eastern tombs uncovered cubical dice dating back to the 20th century BC—but it's believed they're even older. Other ...Read More

How many businesses are ready to pony up several million in additional expenses this year? If history is any indicator, hundreds of companies will need to face the reality of cleaning up after a data breach before this ...Read More

As far as major American cities go, Las Vegas is by far the newest.

Unlike New York, Chicago, and Los Angeles (which were all booming metropolises well before the Civil War), Las Vegas wasn't officially founded until ...Read More

There were 5.2 million nonfatal motor vehicle crashes in 2020, down 22% from 2019, according to the most recent complete data available from the National Highway Traffic Safety Administration. The number of fatal crashes ...Read More