Review: In 'Glass Onion: A Knives Out Mystery' Daniel Craig Is Back on the Case 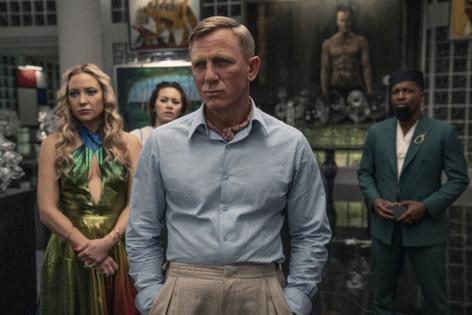 "Glass Onion" is even more fun than the 2019 "Knives Out," which was already a lively little franchise-launcher. This time, instead of poking around among the avaricious relatives of a mysteriously murdered Massachusetts author, we find Benoit Blanc -- "the last of the gentlemen sleuths," you'll remember -- attempting to get to the bottom of a case in which the self-declared victim hasn't even been murdered yet.

Daniel Craig is back as Blanc, with his sweet, syrupy Southern accent still in full effect. This time the celebrated detective is operating on a much broader stage -- the gorgeous Greece of a thousand travel brochures, where a pretentious tech billionaire named Miles Bron (Edward Norton) maintains a super-duper-luxurious island estate looking out on the sparkly Aegean. The centerpiece of this ostentatious getaway is a mansion topped with an enormous glass dome -- the Glass Onion of the movie's title. Bron has invited a select group of guests to this place for a "murder-mystery weekend," during which, he says, he will be murdered. This sounds like a job for Benoit Blanc -- which may be what Bron is thinking: he's clearly alarmed by the detective's presence among the group when it arrives, given the fact that he didn't invite him. This is the story's first mystery; more will follow.

Writer-director Rian Johnson, the creator of this affectionately satirical world, is once more paying homage to the vintage sleuthery of Agatha Christie and, among other things, the movies made from her novels, like "Evil Under the Sun" and "Death on the Nile." And his cast is very much in tune with his aims. Edward Norton has just the right insufferable smirk to portray Bron (we first see him lounging on a beach plucking out the Beatles song "Blackbird" on "the guitar Paul wrote it on"). Janelle Monae takes possession of much of the movie with a sleek, personable performance as inventor Andi Brand, Bron's former associate, who's had some kind of furious falling out with him. And the many other actors on hand all make the most of their finely turned scenes -- Kathryn Hahn as a devious politician, Kate Hudson as a brassy sportswear queen, Jessica Henwick as her antsy assistant, Leslie Odom Jr. as a scientist with the tattered remains of a conscience, Dave Bautista as a blustery (and of course heavily tattooed) YouTube personality, and Jackie Hoffman as his mother, who gets to utter, possibly for the first time ever in a semi-genteel, English-style murder mystery, the words "Fibonacci sequence."

Many of these characters, it soon becomes apparent, have very good reasons to want Bron dead, and Blanc makes it his job to find out who and why. But the clock is ticking, and as shots ring out and poisons are inadvertently gulped, the party slowly dwindles. Of course, for everyone except the departed -- for us, in other words -- this is all great fun. Johnson's dialogue crackles with energy (appalled by a sudden gust of conversational babble, Blanc pronounces it "a minefield of malapropism") and wry attitude (the director gives us a passing shot of a bottled condiment labeled "Jeremy Renner Hot Sauce"). There's also an unusually large number of guest cameos, the most selfless among them contributed by Joseph Gordon-Levitt, who memorably lends his voice to the tolling of an evening bell. As he puts it: "Bong!"

"Bones and All" is a movie that goes for the throat right away. An early scene at a girls' sleepover party hits the screen like a gush of blood and sets a high bar for the terrors that soon follow. The picture is a ...Read More

How fitting that a musical biopic about a maker of pop-song parody videos should itself be a parody. And how cool that it should also be as amiable a brain-fry as "Weird: The Al Yankovic Story." In bringing this long-...Read More

Brandon Cronenberg's new movie, "Infinity Pool," answers the question of what's for dinner by setting before you a plate of blood and guts and -- Jesus, what's that? -- a spurt of unexpected white goo, and then cheerily ...Read More