Review: 'Weird: The Al Yankovic Story' or Behind the Bologna 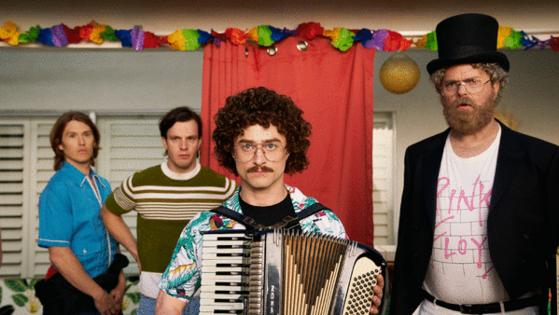 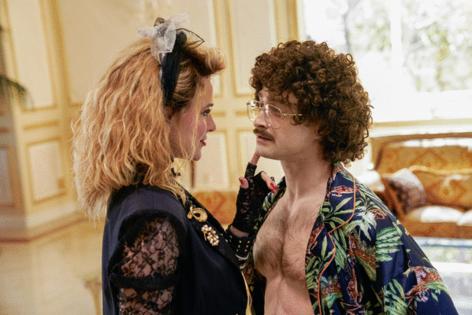 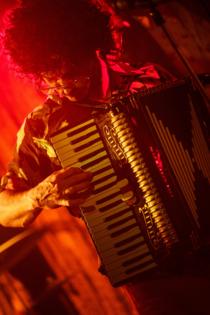 How fitting that a musical biopic about a maker of pop-song parody videos should itself be a parody. And how cool that it should also be as amiable a brain-fry as "Weird: The Al Yankovic Story." In bringing this long-percolating project to fruition (it started as a Funny or Die film a dozen years ago), Yankovic and cowriter-director Eric Appel have managed to keep real life -- the quotidian world of facts, stats and other dull stuff -- several arms' lengths away. I won't go into this too deeply, except to report that some of the movie's radical reality rewrites are pretty brilliant, and that the picture as a whole is more consistently funny than its rather narrow subject matter might seem to promise.

That "Weird" works as well as it does is due in large part to the casting of Daniel Radcliffe -- who looks nothing like Weird Al -- in the role of Weird Al. Kitted out with a curly wig and a moustache so carefully tended it could probably hold down its own nine-to-five job in the straight world, Radcliffe is by turns smiley and sputtery, never loosening his firm grip on the character. Just as important, perhaps, he also plays impressive air accordion. (In the world of the movie, accordion-fueled polka music is hot stuff, held to be the devil's doing, and illicit teenage polka parties are a thing. Polka adepts may be tickled to hear a girl at one of these retro bashes lamenting the fact that accordion superstar Myron Floren has become "way too overexposed" and that "Whoopie John" Wilfahrt -- an actual old-school polka god -- is the real deal: "I'm all about the Minnesota sound," she says, as if parsing the delights of some exotic new grunge scene.)

The movie draws a lot of energy from its many guest cameos. Jack Black plays the bellowy rock DJ Wolfman Jack, whom we see at an all-star LA pool party mingling with Andy Warhol (Conan O'Brien), David Bowie (Gordon Tarpley), and the members of Devo, in their red flowerpot hats. Al's mentor, the junk-pop scholar Dr. Demento (Rainn Wilson), is on hand a lot, guiding his young friend through the lower byways of oddball showbiz. (The real Demento, born Barret Hansen and still with us, used his radio show to champion such outsider artists as Nervous Norvus and Wild Man Fisher; Weird Al was right up his street.)

The movie's MVP, without question, is Evan Rachel Wood, who takes over the picture when she sashays into it as Madonna -- 1980s Madonna, that is, the one with the lace gloves, the bustier and all the crucifixes -- and puts the moves on Weird Al in hope of getting him to do one of his parody videos saluting her new hit "Like a Virgin." (The result, of course, is Al's deathless "Like a Surgeon.") Very soon they're an item. But then the Colombian drug lord Pablo Escobar makes them a birthday party offer they can't refuse, and... well, it's complicated. And not as entertaining as you might wish.

The movie's soundtrack isn't wall-to-wall Weird Al, and I think we should be grateful for that. There's a nod to "My Bologna," of course, and an elaborate concert version of Al's Coolio tribute, "Amish Paradise." But it's Al's march-to-your-own-drummer life philosophy that's most stirring. Early on, long before all the fame and the silliness, we hear him announcing his biggest dream. "One day," he says, "I'm gonna be the best... perhaps not technically the best, but arguably the most famous accordion player in an extremely specific genre of music."

(Weird: The Al Yankovic Story is streaming now, for free, with ads, on the Roku Channel.)

Brandon Cronenberg's new movie, "Infinity Pool," answers the question of what's for dinner by setting before you a plate of blood and guts and -- Jesus, what's that? -- a spurt of unexpected white goo, and then cheerily ...Read More

Say you're a little kid. You're 4 years old and your name is Kevin. You and your sister Kaylee -- she's 6 -- are wandering around the house in the middle of the night searching for your mom and dad. They seem to have ...Read More

"The Pale Blue Eye" is an atmospheric murder mystery set at West Point, the U.S. military academy, in the snowy winter of 1830. This, you may know, was the period during which Edgar Allan Poe was very briefly a cadet at ...Read More

Gerard Johnstone's "M3GAN" draws back the dark curtains of the killer-doll movie genre and lets the sunshine in. The picture is a blast for a number of reasons, but mainly because of its one-of-a-kind star, an unnervingly ...Read More