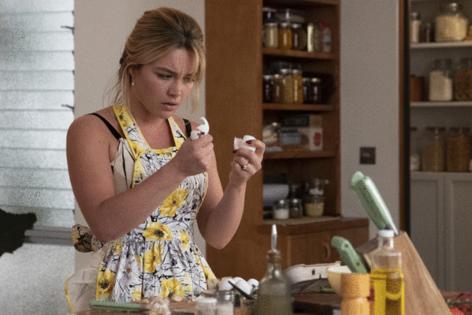 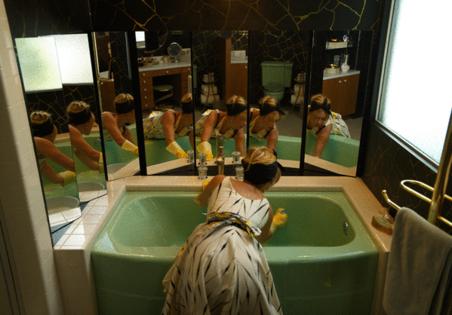 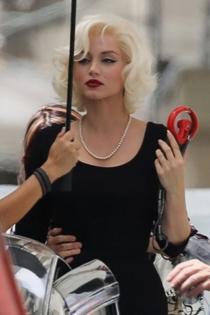 Olivia Wilde's "Don't Worry Darling" is unlikely to revolutionize the world of paranoid sci-fi cinema ("The Stepford Wives," "The Truman Show," "The Matrix," etc.). But it's a great-looking picture, filmed in the sunbaked desert city of Palm Springs, California, where the houses are expensively midcentury and the streets are paved with money. The movie has a nice twisty plot, too, one that may not keep you up nights tugging at its knots but is fun to watch play out, nevertheless. It also has Florence Pugh, a big plus, and feather-boa proponent Harry Styles, who's a small, happy surprise.

Alice and Jack Chambers (Pugh and Styles) are a married couple living in weirdly total happiness in the '50s-style desert community of Victory, which is run by a smooth operator named Frank (Chris Pine, exuding the malevolent charm of a self-help cult guru). The residents seem to love this place (Wilde herself plays an overbearing civic cheerleader named Bunny), but not all of them: One of Alice's friends, Margaret (KiKi Layne), tells her there's something wrong about Victory, and very soon we make the acquaintance of the municipal clean-up team, a gang of unfriendly trouble-hunters in red boiler suits.

Now sensing something a little off herself, Alice broaches the uncomfortable subject to Jack, who's in no mood to discuss "The Victory Project," as it's called. "I'm part of something important," he tells her. Unfortunately, what that something is, exactly, is "classified." Might it have something to do with the Project's mysterious headquarters, a strange round structure out in the sand and scrub -- a place to which all of the community's hardworking husbands light out every morning, but where none of its female residents are permitted to venture? Hold that thought.

That Harry Styles doesn't simply wither in the face of Pugh's tough charisma is a significant achievement -- the man is a big-screen natural. And Wilde, directing her second feature, creates some impressive sequences, especially the clang-bang action of a desert car chase filled with gorgeous vintage wheels. Apart from that and the two leads, many of the movie's pleasures are technical: the clean, gleaming cinematography by Matthew Libatique (Darren Aronofsky's go-to DP); the iconic architecture on display (Richard Neutra's 1946 Kaufmann Desert House serves as Frank's home); and John Powell's unsettling soundtrack, filled with strange, subterranean musical gurglings.

Normally it would be a pleasure to also note that the movie is not too damn long -- how rare is that? But in truth, it's actually a little too short -- the truncated ending is a disservice to all the careful (well, largely careful) plotting that precedes it. At this point in sci-fi-movie history, not a lot of viewers are likely to be mystified about what's going on in this story; chances are, many of them might be here just to luxuriate in the genre. And no doubt carp about the ending.

"Blonde" is an ambitious film that leaves a nasty aftertaste. Based on a novel by Joyce Carol Oates, it's a speculative approximation of the life of Marilyn Monroe, whom the movie portrays as a helpless victim -- of her parents, of men in general and, most crushingly, of the Hollywood star machine -- for most of her 36 years. In the movie, it feels like her victimization continues.

We meet her as a child, Norma Jeane Mortenson (Lily Fisher), being horribly abused by her schizophrenic mother (Julianne Nicholson), then consigned to an orphanage and later to foster homes (in which it's said she may have been sexually molested). After this, with Ana de Armas stepping in as Marilyn, the movie skips her first marriage, to a factory worker, and joins her on a bottom rung of the motion-picture business, being raped on her knees in the office of a studio chieftain (possibly 20th Century-Fox production boss Darryl F. Zanuck). There follows a period of amiable sex sessions with two low-level Hollywood princes, Charles Chaplin Jr. (Xavier Samuel) and Edward G. Robinson Jr. (Evan Williams). These lead to Marilyn's first unplanned pregnancy -- and one of the movie's most absurd passages, in which her fetus begins to comment on the proceedings.

Marilyn briefly marries baseball star Joe DiMaggio, who resents her sex-star notoriety and beats her for it, and then weds egghead playwright Arthur Miller, who treats her better but also secretly uses her in his work. Having established the screen persona of a bubble-headed sex toy, she is mocked for her literary interests (what is this nonsense about reading Chekhov?) and her determination to become a real, serious actor -- even after studying at New York's method-acting mecca, the Actors Studio.

In its commitment to victimology, the movie doesn't mention Monroe's three Golden Globe wins (although two were for "world popularity," and only one for acting, in "Some Like It Hot," in 1960), or that for several years she ran her own Hollywood production company (with celebrity photographer Milton Greene).

Written and directed by Andrew Dominik ("The Assassination of Jesse James by the Coward Robert Ford") and photographed in both color and black-and-white by Chayse Irvin, "Blonde" has some beautifully rendered scenes (especially the ones in black-and-white) and a fearless lead performance by Ana de Armas, who captures Marilyn's unstoppable determination and her ability to stand up under some of the worst humiliation showbiz has to inflict. But the movie is nearly three hours long, and by the time it finally reaches its conclusion, you may be wondering whether it's time, at last, to leave this poor woman alone.

(Blonde is in limited theatrical release now and will start streaming on Netflix on Sept. 28.)

Peter Dinklage should have been somewhere in Europe this week, shooting a "Hunger Games" prequel called "The Ballad of Songbirds and Snakes." Instead, though, he remained in New York to support his friend, director Sacha ...Read More

Spooky-house movies have been a go-to genre for scrappy low-budget filmmakers at least since James Whale's 1932 "The Old Dark House" (one of the four horror pictures Whale made at Universal: he also directed the first two ...Read More

The Spanish actor Javier Bardem has scored some of his biggest commercial successes playing psychos in movies like the Bond film "Skyfall" and the Coen brothers' "No Country for Old Men" (for which he won an Oscar with his...Read More

For the longest time I was convinced there was nothing George Miller couldn't do, no movie he couldn't make. Erupting out of Australia in 1979 with the ultra-metal action classic "Mad Max" -- the first installment of a ...Read More

Aubrey Plaza, the queen of weaponized deadpan, plays it all-the-way straight in "Emily the Criminal," a tough little first feature by writer-director John Patton Ford. The movie has a topical spin -- it's set in the world ...Read More

"Bodies Bodies Bodies" is what happens when you try to make a movie that winks knowingly at a done-to-death genre format -- in this case, the one in which a group of attractive/stupid youths venture out to a remote cabin ...Read More