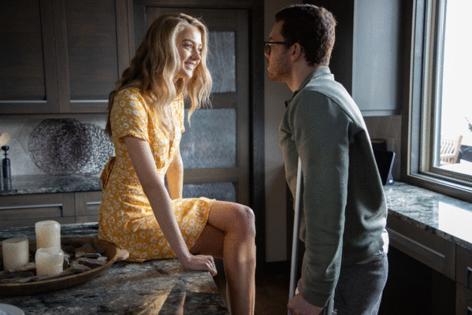 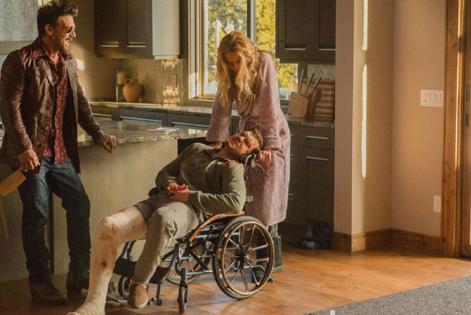 "Shattered" is a generic crazy-lady thriller that's almost charming in its lack of ambition. There's not a moment in it in which you're not pretty sure where the story is heading. This makes it a perfect movie for the cinematic dead zone of January, as comforting in its familiarity as a warming cup of cocoa.

But the picture is also a little better than you might expect. German actress Lilly Krug plays the requisite crazy lady -- a young woman called Sky -- as a twinkly blonde psychopath (think Amber Heard with a power drill) whose pert demeanor comes to seem increasingly demented as the picture traverses its tight, 92-minute runtime. Frank Grillo is happily on hand as well, providing gruff menace and virtuoso sleaze as Sky's scary associate, Sebastian. And for reasons best-known to himself -- maybe -- John Malkovich is in this movie, too. He plays a motel owner named Ronald -- a role that unfortunately affords him no opportunity to deliver the sort of sniffy Malkovichian line readings that the world has come to adore. Instead, he spends most of the movie trying to clear a little space where some snazzy acting might be done. He is not entirely successful in this.

The picture was filmed in snowy Montana, presumably because somebody got a deal on using part of the Big Sky ski resort as a stand-in for the mountain compound of a reclusive young tech millionaire named Chris (Cameron Monaghan, late of "Shameless"). Spanish director Luis Prieto employs the chilly exteriors to give the film a fresh-air vibe, and the woody interiors to lend it a feeling of gleaming isolation. Whatever else it may be missing, the movie does have a look.

The story begins late one night when Chris is approached by Sky in the wine section of an upscale supermarket. She wants a wine rec. He says Nebbiolo. Then they go back to his place for sex and backstories. Sky is a fashion model who left LA for Montana because she got tired of being just "a body in clothes." Now she works in a local bar and lives in a motel with a crazy roommate named Lisa (Ash Santos). Chris, clearly a world-class dimwit, sees nothing odd about this story. Nor does he feel any hesitation about telling Sky -- a total stranger -- how loaded he is. (He struck it rich after selling Google a digital home-security system that he invented -- a factoid that would like to be remembered.)

After Chris sustains a broken foot in a sudden spasm of violence, Sky sweetly offers to move into his home and become his live-in nurse. Cementing his idiot-of-the-year status, Chris says sure. Before long, Sky is ripping the mask of cuteness and sanity from her face and telling Chris, "You're rich and you have things I want." To get them she'll need all of Chris's passwords and security codes so she can start emptying out his bank accounts. She wants him to call up his stockbrokers, too. And since his thumbprint will be required to enable Sky and Sebastian to get into his safe-deposit box, and since he won't actually be present on that expedition ... well, further sacrifices will have to be made.

"Shattered" is bracingly bloody, but not insanely so. It's a genre movie that knows what's expected of it and provides as much low-rent fun as it can -- which is not enough, alas. It might have been a better film with an actor more expressive than Cameron Monaghan in the lead. And maybe a livelier script than the one provided by David Loughery. Although Loughery has contributed some sharp lines. When the beaten-down Chris asks Sebastian why he and Sky are looting his life, Sebastian says, "You weren't usin' it."

OK, you've got a quintet of action chicks and you need to save the world. What do you do first?

It depends, of course -- save the world from what? After nosing around a bit, you learn that somebody somewhere has a ...Read More

Paul Thomas Anderson's "Licorice Pizza" may not be a full-on coming-of-age classic; it's a little disjointed and maybe a little too long. But whenever the beaming Alana Haim is onscreen, or Bradley Cooper roars in to do ...Read More

How much could there possibly be to say about the new live-action "Aladdin"? It's another squeeze of the Disney property that's already yielded a phenomenally popular 1992 animated film, a pair of straight-to-video sequels...Read More

Bradley Cooper might not be anybody's first pick to star in a latter-day film noir. He seems too warm and intelligent, with an appealing smile of the sort that's unlikely ever to portend anything good in the dark noir ...Read More

"Bohemian Rhapsody" -- which recounts the life of the late Queen singer Freddie Mercury, played by Rami Malek -- is pretty wonderful in several ways, but it's also a museum of ancient biopic cliches. For example, we see ...Read More