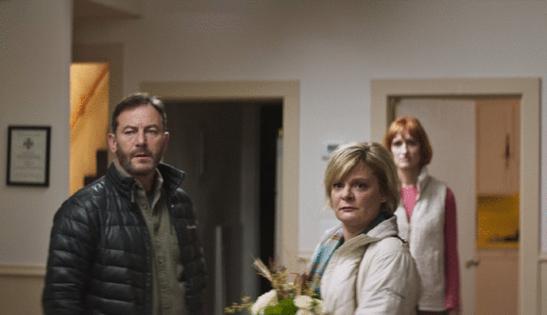 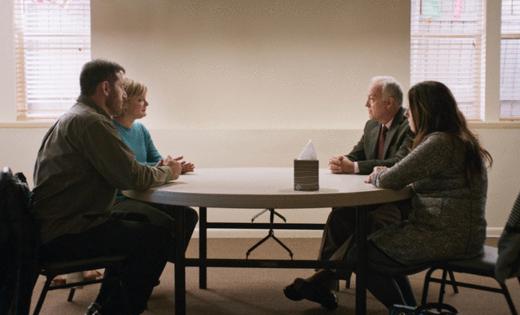 "Mass" is a movie that brings the magic of theatre into your local art house (although probably not into your local multiplex). The cast essentially consists of four richly gifted actors, divided into two couples. Jason Isaacs and Martha Plimpton are Jay and Gail, whose teenage son Evan was killed six years ago in a school shooting. His killer, a kid named Hayden, who died at the scene of the slaughter, was the son of the other couple, Linda and Richard, played by Ann Dowd and Reed Birney. Now the four parents, their hostility having presumably subsided somewhat in the intervening years, have agreed to a therapist's plan for a meeting on neutral ground: a small, bland suburban church.

What we have here, you may be unexcited to hear, is four people sitting in a room talking -- the sort of bare-bones setup that has always been a tough sell to moviegoers. But Fran Kranz, the first-time writer-director (who's also a veteran actor), has structured the story as an examination of soul-searing emotional issues, and for the most part the movie is not for a single moment boring. (It wanders briefly at the end.) Who really bears the guilt for that shooting, in which 10 students were killed? Was it only Hayden, the boy with the guns and the pipe bomb (which he assembled from instructions found on the internet)? Or was it also his parents, who must have seen warning signs of their child's growing mental distress? And who can finally put an end to the hurt and the hatred that continue to fan the embers of that hateful day?

The story would likely be unbearable without some respite, and Kranz uses the awkwardness of the parents' meeting to administer daubs of light humor. (Linda, the shooter's mother, making nice, has brought a small pot of flowers along, but they seem so out of place at the center of the table around which they're all sitting that Jay furiously snatches them away.)

The plot kicks in quickly, however. "We're not here to attack you," Jay tells Linda and Richard. "But we're not going to apologize for our feelings."

"Tell me about your son," says Gail. "I want to know everything. Because he killed mine."

The outline of young Hayden's story is familiar by now. He didn't play well with other kids, who thought him weird. (His hobby was collecting snails.) He was interested in artillery and spent a lot of time on his computer playing first-person shooter games. He had thoughts of suicide and even homicide. He was in therapy and on meds, too. Jay is infuriated by this misfit litany -- why didn't Linda and Richard raise an alarm with the school about Hayden's problems? "He wasn't always all those things," says Linda. "I have to reconcile his actions with the child I loved and raised."

The movie wouldn't work without the best efforts of its exceptionally well-balanced cast. Those who only remember Isaacs from his role as Lucius Malfoy in the "Harry Potter" films, or Plimpton from her performance in the movie version of Stephen Sondheim's "Company," are likely to be ravished by their work here, providing detailed accounts of different strains of sorrow, one softly receding, the other still aflame. Similarly, the incomparable Dowd ("The Handmaid's Tale") and the deceptively mild Birney, a stage actor with a clutch of Tony and Obie awards to his credit, masterfully convey the subtle, telling differences between their two characters.

The puzzlement at the heart of the story is never tidily resolved: Who was responsible for the school massacre -- the shooter, his parents, the culture at large? The movie broadens its scope a little to look beyond these questions. "The world mourned ten," says Linda, the killer's inconsolable mother. "We mourned eleven."

Kurt Loder is the film critic for Reason Online. To find out more about Kurt Loder and read features by other Creators writers and cartoonists, visit the Creators website at www.creators.com.

"Shang-Chi and the Legend of the Ten Rings" doesn't feel a lot like a Marvel movie, although it's clearly been made on a Marvel budget. The picture is a lot of fun, even if it isn't overflowing with the sort of slick comic...Read More

Of all the douchebags on parade in "The Lost Leonardo," an art-crime documentary with no shortage of them, the douchiest might be Yves Bouvier, a Swiss scammer whose purpose in life, until recently, was to make himself ...Read More

You know you've wandered into a neo-noir movie of a certain sort when the humidity's a bitch and everything's wet -- rain-slicked streets, sweat-slicked faces. The weather's hot, and of course so are the women. People ...Read More