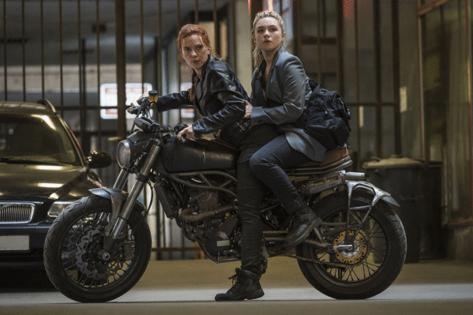 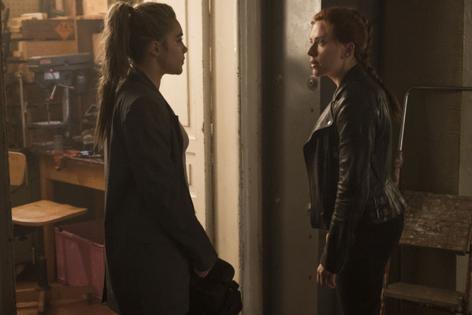 You knew it would come to this. After a decade of patiently enduring her female fate -- waiting around to be granted her own stand-alone movie while one male Avenger after another got his (Captain America, Thor, Iron Man, Iron Man, Iron Man -- even Ant-Man, for God's sake) -- Scarlett Johansson's Natasha Romanoff finally gets the call. But it's too late -- in the Avengers timeline, Natasha is dead. And it wasn't much of a death, either: At the end of the 2019 "Avengers: Endgame," she fell from a cliff and got one final shot as a corpse before the story moved on without further ado.

"Endgame" was the last hurrah for the original Avengers, but of course no one at Marvel/Disney was ever about to let this cash geyser stop gushing. So, a narrative cheat was devised: The next movie would be set in 2016, a year in which Natasha was still alive. As you'll surely recall, that was the year of "Captain America: Civil War," in which the Cap and Tony Stark/Iron Man had a big falling out and Natasha disappeared.

Now -- in 2016, that is -- we find Natasha on the run in Europe (the movie globe-trots expensively from Norway and Hungary to Morocco and England and beyond). She has to cool her heels for a bit, though, while the story flashes us back to 1995 Ohio to meet two little girls -- pre-teen Natasha and her younger sister Yelena -- who are living happily with their immigrant parents Alexei (David Harbour) and Melina (Rachel Weisz). Then disaster strikes in the form of a S.H.I.E.L.D. snatch team. It turns out the parents aren't really parents and the sisters aren't really sisters, either; they're all part of a sleeper cell of KGB spies (even though, in the real world, Russia had disbanded the KGB in 1991). Alexei -- once a Soviet superhero called Red Guardian -- is tossed into prison; Melina is consigned to a hog farm (long story); and Natasha and Yelena are shipped off to the Red Room -- a most unpleasant spy-training school dedicated to turning young girls into deadly assassins, or "black widows."

As you might now guess, "Black Widow," directed by Australian filmmaker Cate Shortland, is not a standard-issue Avengers offering. It's actually about Natasha reuniting her sundered family -- breaking Dad out of prison, liberating Mom from the pig place and trying to track down Yelena. Which is to say, the movie has quite a bit of heart, and even a few quiet moments (although they don't last long). It also gives Johansson more room than usual to demonstrate her under-heralded acting skill -- something she has previously revealed in such films as "Marriage Story," "Jojo Rabbit" and "Vicky Cristina Barcelona." She can light up a scene with a well-timed glance and a melancholy smile, and her subtle technique is fascinating to watch.

The movie's central figure, though, is the exceptional Florence Pugh ("Midsommar"), who plays Natasha's semi-sister Yelena with a Russian accent as thick as a gob of sour cream -- and makes it work. Yelena is full of wisecracking spunk (the scene in which she ribs Natasha about her hair-flipping battle pose is all the funnier for being so casually offhand), and we quickly realize that she's on hand to take up the Avengers torch from Natasha and inaugurate a new phase of the franchise. Pugh, with her non-glam looks and no-nonsense presence, is an excellent choice for this assignment.

Despite its embrace of family and feelings, "Black Widow" is very much an action movie -- or, more specifically, a slam-bang international spy film. With its cobbled Euro courtyards and hell-bent car-chase scenes, it strongly resembles a "Bourne" movie; its mile-high Red Room headquarters is an echo of the Alpine Blofeld lair in the long-ago Bond film "On Her Majesty's Secret Service." Some of the film's action choreography will surely become iconic -- like the scene in which we see Natasha leaping off a prison catwalk to grab onto a cable dangling from an escape helicopter choppering by overhead. (Sure, it's mostly CGI, but it's really well-done CGI .) There's also an effectively menacing villain dogging the two women's footsteps as they track down some sort of mind-control stuff (long story number two) -- a hooded, metal-faced figure called Taskmaster.

There are a few things in the movie that don't work, of course. Ray Winstone, cast as the Red Room master Dreykov, is too matey an actor to be very unnerving -- especially when he gets some of the script's lamest dialogue (going all woke with, "The only natural resource the world has too much of (is) girls" and addressing a group of his assassins who've found a new victim with the hootable, "Make her suffer!"). And the movie's inevitable collapse into a blizzard of digital clutter at the end is even more dispiriting now, in this supposedly new Marvel age, than it was before.

But Johansson and Pugh are a top-drawer team, and Pugh, continuing on her own, promises to be a freshening influence on the 13-year-old Marvel superhero universe -- a good reason to stay tuned.

At the end of June 1969, about six weeks before the soon-to-be-famous Woodstock rock festival got underway in upstate New York, a somewhat smaller event called the Harlem Cultural Festival kicked off at a big municipal ...Read More