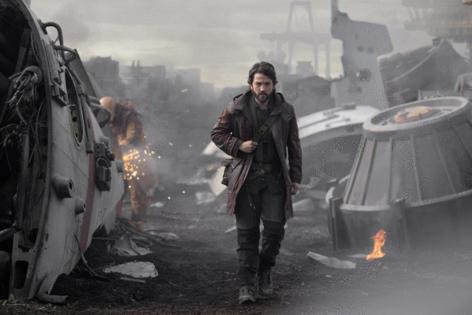 LOS ANGELES — My late mother didn't have much of a chance to fully assimilate into American life. She moved to the United States from Mexico as a 9-year-old in the early 1960s and went to work almost immediately — first in garlic and strawberry fields, then as a packer in the old Hunt-Wesson cannery in Fullerton. Although she learned English, Mami spoke Spanish almost exclusively for most of her life.

That didn't stop her from enjoying almost everything Hollywood had to offer.

Her tastes over the decades largely mirrored those of mainstream America. She enjoyed the screwball antics of Lucille Ball, Carol Burnett and Benny Hill. She swooned over Omar Sharif in "Doctor Zhivago" and Burt Reynolds in the "Smokey and the Bandit" films. She thought Steve Martin was a brilliant actor and loved game shows like "Family Feud" and "The Chase."

Mami didn't care for ultraviolence or on-screen nudity. But she saved a special kind of ire for a franchise I never expected her to hate: "Star Wars."

I could never convince her to sit down with me to watch the original trilogy on VHS. I humored her harrumphs when my best friend and I waited in line for hours to see the second batch in the late 1990s. Mami wouldn't even buy my arguments that Star Wars was secretly Mexican because R2-D2 sounded like "Arturito" ("Little Arthur" in Spanish) and we knew a lot of guys nicknamed Chuy.

Her main issue with the intergalactic saga was that she found it improbable. For someone who loved Disney movies involving Flubber and talking lions, the idea of humans fighting it out in space was just silly. "¿Qué es eso?" she'd always remark — what's that about?

It wasn't until this Thanksgiving holiday, when I binge-watched the newest Star Wars television drama, "Andor" on Disney+, that I finally figured out what bothered Mami so much about the world of Jedi and Sith.

She grew up in an era where Mexican actors like Anthony Quinn and Ricardo Montalban were cinematic royalty, while ranchera icons like Antonio Aguilar and Lola Beltran regularly graced L.A. venues like the Hollywood Bowl and the Million Dollar Theater. Latinos weren't all over the industry, but we were there.

The original "Star Wars" series, on the other hand, was whiter than chalk — you know your equity numbers are bad when the only brown-skinned characters are Wookies and Jabba the Hut.

Representation mattered to Mami, even if she never said it outright. That's why I think she would've become a fan of "Andor."