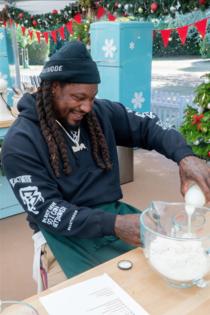 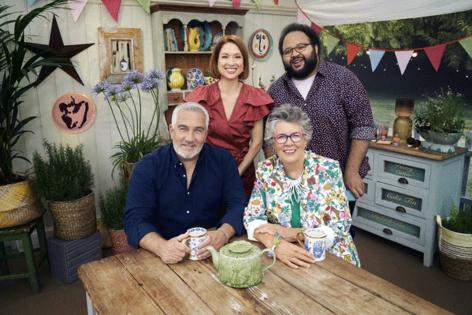 The former Seattle Seahawks running back is one of six contestants on a new celebrity special of "The Great American Baking Show," a spinoff of the beloved British competition show. Lynch — introduced by host Ellie Kemper as "hoping to turn Beast Mode into Yeast Mode" — competed with D'Arcy Carden, Liza Koshy, Nat Faxon, Chloe Fineman and Joel Kim Booster.

Lynch is better known for his love of Skittles than for his own baking, and his inexperience quickly became apparent in the famed baking show tent. The first challenge required contestants to bake eight identical cream puffs shaped like holiday characters — Lynch chose Christmas elves, filled with strawberry cream and topped with fondant hats.

"If you could just go ahead and throw me a couple little pointers, I wouldn't hate them or snitch on you or none of that," he told the judges, decked out in a Beast Mode hoodie and beanie.

What do you need help with? Hollywood asked. "All of this," he said.

The plate of elfish cream puffs was in disarray when the judges came to taste them, but Lynch explained that there had been a fight between North Pole and South Pole elves. The judges accepted the explanation and told Lynch his fluffy, golden choux pastry buns were "really delicious."

The second challenge — the meringue wreath — went south quickly. Lynch struggled to separate eggs and whisk them with sugar ("What is soft peaks? I don't know what this is"). Later, he added an entire jar of vanilla bean paste to his meringue (the recipe had called for one teaspoon). The result: a meringue (which Lynch pronounced "mer-ain-gay") that Hollywood said "burned his mouth."

"What's whisked?" Lynch sheepishly asked the judges after they said his meringue was underwhisked, but his cream was overwhisked. "Y'all are using different language."