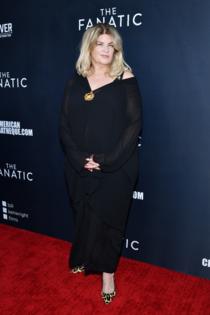 When a celebrity dies, his or her religion is rarely a big part of the story. But Kirstie Alley’s identity off-screen was largely tied to being an outspoken envoy and defender of Scientology, the controversial and heavily criticized faith founded by sci-fi writer L. Ron Hubbard.

Alley, who died Monday of colon cancer at age 71, was a staunch Scientologist for more than 40 years. Below are some of her thoughts on the faith, in her own words, pulled from her 2012 autobiography and from interviews over the years.

“Scientology has been cloaked in mystery fabricated by the press, mostly,” the “Look Who’s Talking” star wrote in her memoir, “The Art of Men (I Prefer Mine Al Dente).” “It’s actually analytical and easy to understand. It does not include aliens, although I’d love to meet a few and believe we are not alone in the vastness of the universe.”

Alley wrote that her goal with the chapter on Scientology was “not to convert anyone” but to tell people why she chose it as her religion and what effect Hubbard had had on her life. “All religions,” she said, “sound a little wacky if you take them literally and if they don’t happen to be your own.”

Elsewhere in her memoir, the Emmy winner described reading Hubbard’s “Dianetics: The Modern Science of Mental Health” — a canonical text of Scientology — when she was addicted to cocaine. It was 1979, she was using all sorts of other drugs at the time and was, in her words, “a hot mess.”

“‘Dianetics’ made me aware of one distinct factor: I was really f— up and was killing myself spiritually even more so than physically,” Alley wrote. “Not only was I betraying others, but I was giving my own moral code and integrity a thrashing. So the first thing I hoped to get out of ‘Dianetics’ was a certainty of my own truths, and to become honest. I wanted to become sane and helpful, useful to the world around me. Of course I knew I’d made myself nuts by doing drugs. But what had provoked me to do them in the first place? That’s what I hoped I’d find out from Mr. L. Ron Hubbard by the end of ‘Dianetics.’”

She went on to discuss Scientology’s approach to mental health, which differs from medical best practices in that church members will not — in Alley’s words — use “psychotropic drugs, electroshock therapy, or lobotomies to get better” from things like anxiety, depression, grief and psychosis.

“It’s not because we don’t believe that all these things exist or that they are not real,” Alley wrote. “Try to tell a man he’s not chronically depressed or a new mother she doesn’t really have postpartum depression, and you might get shot. They do exist. They are real. They are painful, debilitating, gruesome, and at times unbearable. ... The issue is, what do you do to get rid of them?”

Alley said she had one Scientology counseling session and never wanted to do drugs again, though she admitted that sort of result didn’t happen so quickly for many people. After later sessions, she figured out why she was depressed and that faded away too, she said.

“Apparently I was ready to confront the dreadfulness called me, and I prevailed. I never turned back. Every day I worked on some part of my screwed-up life until the anxiety dropped away,” she wrote.