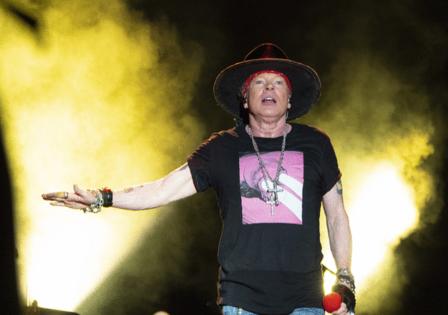 Over the weekend, Guns N’ Roses frontman Axl Rose announced that he would no longer toss his microphone into the crowd at the end of each concert — which he has done “for over 30 years.” His statement came shortly after Rebecca Howe of Andrews Farm, Australia, said Rose’s flying microphone struck her in the nose at a Guns N’ Roses show in Adelaide.

Howe told the Adelaide Advertiser that the impact from the mic left her bleeding, “in shock and hyperventilating.” A widely circulated image shows purple cuts and bruises around Howe’s nose and eyes.

“It’s come to my attention that a fan may have been hurt at r show in Adelaide Australia possibly being hit by the microphone at the end of the show when I traditionally toss the mic to fans,” Rose wrote in a statement shared Friday on Twitter.

“If true obviously we don’t want anyone getting hurt or to somehow in anyway hurt anyone at any of r shows anywhere. ... we always felt it was a known part of the very end of r performance that fans wanted and were aware of to have an opportunity to catch the mic. Regardless in the interest of public safety from now on we’ll refrain from tossing the mic or anything to the fans during or at r performances.”

In an interview with the Adelaide Advertiser, Howe said that Rose “took a bow and then ... launched the microphone out to the crowd” after performing the final song of the night, “Take Me Down To Paradise City.”

"… and then bang, right on the bridge of my nose,” she recalled.

Howe said she worried that her nose was broken and that her face had “caved in” before an “off-duty police officer” pulled her to the side. According to the Adelaide Advertiser, another Australian fan, Darren Wright, took legal action against Guns N’ Roses in 2013 after a projectile microphone damaged his two front teeth.

“What if he throws the microphone again into the crowd and something worse happens?” Howe told the local news outlet.