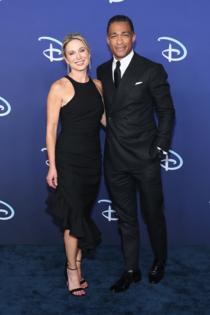 The “Good Morning America” co-hosts won’t appear on air while ABC News considers how to handle the recent revelation of their alleged romance, network president Kim Godwin told employees Monday, according to Variety.

Robach, 49, and Holmes, 45, didn’t break any network rules, but the public attention surrounding them caused “an internal and external disruption,” Godwin reportedly said during an editorial call.

Stephanie Ramos and Gio Benitez filled in on Monday’s episode of “GMA3: What You Need to Know,” an afternoon edition of “Good Morning America” co-hosted by Robach, Holmes and Jennifer Ashton.

Ramos briefly addressed Robach and Holmes’ absence at the top of the show, saying they “have the day off.”

ABC executives plan to “do what’s best for the organization,” Godwin reportedly told his staff Monday. An ABC News representative didn’t immediately respond to a Daily News request for comment.

Monday’s development comes about a week after initial reports of Robach and Holmes’ relationship.

Holmes and Robach, who have worked together at ABC since 2014, most recently co-hosted last Friday’s episode of “GMA3.” It’s unclear whether future “GMA3″ episodes will continue to use Ramos and Benitez, according to Variety.

Robach and Holmes haven’t publicly addressed the rumors, and both went dark on social media following last week’s reports. Shue removed images of Robach from his Instagram page amid the drama.