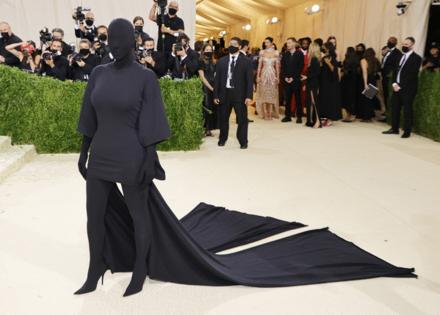 Try as she might, Kim Kardashian is having a difficult time distancing herself from the separate controversies engulfing her ex-husband Kanye West and the luxury fashion house Balenciaga, her lucrative fashion brand partner.

West, of course, is the father of Kardashian’s four children. In a parenting capacity, the reality TV star has to deal with the fallout from his antisemitic rages, denial of the Holocaust and association with a notorious white supremacist, as well as his pariah status in American culture and his periodic accusations that she was an unfaithful spouse or an unfit mother.

But the rapper and Yeezy designer also looms large in Kardashian’s current status and wealth as a fashion star. So does Balenciaga.

Because of Kardashian’s personal relationship with West, people suspect she’s been reluctant to condemn his controversial statements more forcefully over the years. In the case of Balenciaga, people think the Skims shapewear founder is motivated by money and professional status to not cut ties with the French-based fashion house, even after it made the controversial decision to showcase toddler girls in a bondage-themed ad for teddy bear purses.

Celebrity reputation expert Lauren Beeching said that Kardashian’s statement last week, expressing “disgust” and “outrage” over Balenciaga’s BDSM-themed holiday campaign, was rightly criticized as coming across as insincere. Kardashian made it easy for people to believe she doesn’t care about children’s welfare but is mostly worried about losing a highly lucrative partnership and the “huge opportunities” it’s given her “to be respected in the fashion world,” Beeching said in an interview with The Sun.

“These things often come down to the money involved in these possible partnerships,” Beeching said.

Kardashian was torched online for her statement, first, because it came a week after the controversy first erupted. By the time Kardashian finally spoke up, Balenciaga had already apologized for featuring children in its campaign, which also contained a child-porn reference. It also had removed the ad images from its social media platforms. Kardashian was furthermore criticized for refusing to fully cut ties with the fashion house, instead saying that she was “reevaluating” her relationship with the brand.

“It’s also what we call a temporary statement, with it being on her Instagram story it suggests that this isn’t something she wants to attach herself to,” Beeching said. She said Kardashian’s response probably was delayed because, behind the scenes, her team was holding meetings with Balenciaga “to come to an agreement on her response following the public pressure.”

It appears that Kardashian tried to save face over the Balenciaga controversy in other ways during the week. She allowed news to leak that she had already done some of her reevaluating and decided to reject Balenciaga’s offer to do a 2023 campaign, as TMZ reported. She also decided to not wear Balenciaga clothing at events she’ll attend in coming months, and has contacted other designers about dressing her.

Meanwhile, Kardashian has been publicly silent about her ex-husband’s latest disturbing behavior, including his antisemitic tirades during an interview with Alex Jones, and his threatening rants on Twitter that got him booted off the platform by Elon Musk late Thursday night. That said, Kardashian apparently let sources close to her talk to the Daily Mail and denounce West, who legally changed his name to Ye, for making the claim that she had an affair with Phoenix Suns star Chris Paul.