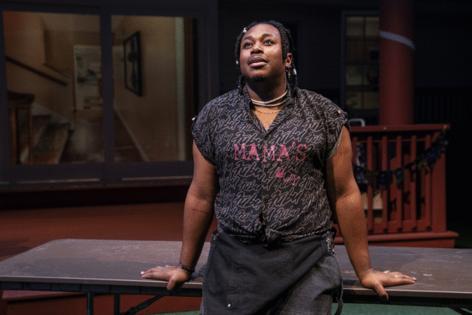 On the heels of the Tony Award-winning musical “A Strange Loop” and the recently opened Lee Daniels-produced “Ain’t No Mo’,” The Public Theater’s production of James Ijames’ “Fat Ham” is getting transferred to the Main Stem next spring.

The 2022 Pulitzer Prize-winning play will begin its limited 14-week engagement at the American Airlines Theatre on March 13, 2023, producers announced Monday.

“Fat Ham,” which had its world premiere as a streaming production via Philadelphia’s Wilma Theater during the COVID-19 pandemic, is a modern adaptation of Shakespeare’s “Hamlet” with a queer, Black, Southern University of Phoenix student named Juicy as its protagonist.

Days before the National Black Theatre co-produced romp started performances at The Public Theater’s Anspacher Theater, it was awarded the 2022 Pulitzer Prize for Drama. Marjorie Miller, the administrator of the prestigious honor, described the play as “a funny, poignant play that deftly transposes Hamlet to a family barbecue in the American South to grapple with questions of identity, kinship, responsibility and honesty.”

The 41-year-old Ijames told the Daily News he was “overwhelmed and so honored” to win the prize, which recognizes “an exceptional American play” staged in the last year.

“I’m humbled to be in the company of so many writers I’ve studied and admired, Ijames said at the time. “This play is a love letter to where I come from and the people who raised me and still love and support me!”

The Bessemer City, North Carolina native is the latest in a growing list of Black, queer narratives being welcomed with open arms in New York City’s theater community.

A number of productions focusing on same-gender-loving men of color, including Richard Greenberg’s “Take Me Out,” James Earl Hardy’s “B-Boy Blues,” Mansa Ra’s “What the End will Be” and “Soft” by Donja R. Love, were staged on and off Broadway.

In an interview with The News, Emil Wilbekin, a cultural critic and founder of the nonprofit Native Son, described it as “a new revolution.”

“The beauty of this Black queer theater revolution is that it creates representation of Black gay and queer men as human beings with full lives, emotional depth and stories that touch your soul,” Wilbekin said. “These characters are no longer marginalized, sidekicks or jokes. They are leading men with transformational experiences.”