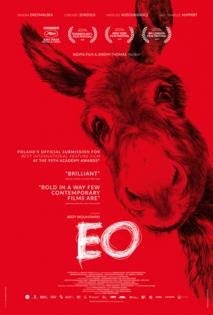 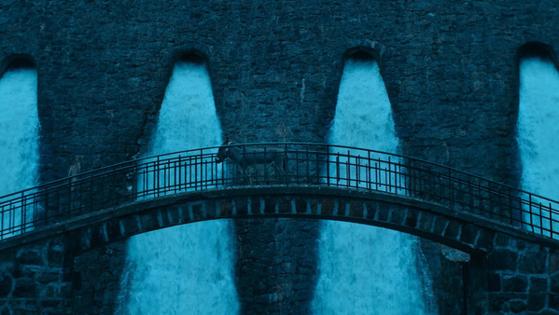 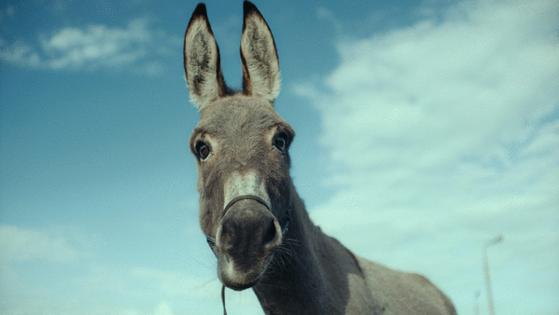 In one of the most astonishing sequences in "EO," a rapturous hymn to the natural world from 84-year-old Polish director Jerzy Skolimowski, a wandering donkey gets lost in a forest primeval. Night has fallen, but pools of moonlight illuminate this hushed, dark world in all its living glory. A little frog skims along the surface of a rushing stream. A skittering spider spins its web. An owl frowns down at the donkey from its treetop perch, as though registering an intruder's presence. There are also a couple of howling wolves, a wary red fox and, in time, an array of green laser beams announcing the presence of nearby hunters, whose gunshots shatter the serenity of this woodland idyll.

The entire sequence tells much of the movie's story in miniature. Again and again this donkey, known as EO (an approximation of the sound he makes), will experience a moment of freedom, only for a few human beings to come along and drag him back into harm's way. If that risks making "EO" sound like a compendium of cruelty, rest assured that it isn't, though it may speak to Skolimowski's decades-long affinity for underdogs in movies like "Le Départ" (1967) and "Essential Killing" (2010). He knows that humans can be kind, but also that they can be abusive, with their often callous indifference to the rights and welfare of other creatures. The beauty that Skolimowski and the cinematographer Michal Dymek show us in "EO" — and shot for shot, this could be the year's most breathtakingly beautiful movie — isn't a denial of that cruelty, but a response to it.

It begins with a screen-flooding burst of red light and a thunderous passage from Pawel Mykietyn's orchestral score, which pulses and surges hypnotically throughout. In this early moment, EO is part of a circus act with a young performer, Kasandra (Sandra Drzymalska), who coos to him, caresses his coat and gives him carrot muffins to eat. Kasandra becomes the love of his life, the human he dreams about and longs for after they're separated and he is shipped off to his next home. But that's as far as Skolimowski goes in imputing motives or desires to EO, apart from the basic compulsions to eat, rest and roam. As the director seems to signal with regular closeups of EO's enormous eyes — they're somehow both inscrutable and soulfully expressive — there are limits to how much we can enter into, or even imagine, a donkey's inner life.

Others, however, are happy to speak on his behalf: "Can't you see this animal suffers?" an activist yells during a protest that will cause the circus to disband and send EO and his fellow four-legged performers running in all directions. The rest of this swift and relentless 86-minute movie (which Skolimowski scripted with his wife, Ewa Piaskowska) follows the donkey on a zig-zagging trek across Poland to Italy, over rolling hills and man-made bridges, through tunnels and past wind turbines and into that enchanted forest. At one point, in a shot so serendipitous it feels almost supernatural, a herd of galloping horses materializes alongside EO's transport vehicle, their exhilarating freedom throwing his confinement into painful relief.

Along the way there are brief stops at a newly opened barn, where EO is gently nuzzled (but also frightened) by majestic horses, and a raucous sporting event where he becomes a grievously abused mascot for the winning team. From there he's brought to a large facility where, by some whim of human mercy, he's nursed back to health rather than put down. (Some of his neighbors aren't so lucky.) From there he will ride along with a couple of drifters and eventually make his way to an Italian villa, where a countess played by none other than Isabelle Huppert breaks a few dishes and glares seductively at a hunky priest (Lorenzo Zurzolo). Huppert also becomes, I think, a kind of emblem of the larger European art-house cinema in whose domineering shadow this brilliant movie and its lowly, animalist (as opposed to lofty, humanist) concerns take root.

Which is not to suggest that "EO," which shared the third-place jury prize at this year's Cannes Film Festival, has gone unnoticed or unrecognized, though it could easily get lost at the few American theaters where it will be shown, as it should be, on the big screen. When I first saw "EO" at Cannes, it was spoken of, sometimes dismissively, as more or less a contemporary remake of "Au Hasard Balthazar," Robert Bresson's 1966 masterpiece about the life, death and extraordinary beauty of a donkey much like this one. Both Balthazar and EO love and are loved by a human, and both are forced to become beasts of burden. Both also bear deadpan witness to all manner of human awfulness and absurdity.

Skolimowski, for his part, has acknowledged "Au Hasard Balthazar" as both an inspiration and a point of departure. While both films share a clear empathy for their protagonists, their visual and rhythmic differences are no less obvious. Bresson's stately black-and-white compositions and gently flowing dissolves are a far cry from Agnieszka Glinska's jagged edits and Dymek's sweeping, vibrant-hued camerawork, especially those angry shocks of red. (The boldness of the imagery speaks to Skolimowski's background as a painter.) And while Bresson folded an intricate human drama into the background of "Balthazar," the humans in "EO" are interesting but comparatively interstitial figures. Their problems and sufferings — one weeps, another dies — concern us only to the degree that they impact EO.

EO himself is played by six donkeys — their names are Hola, Tako, Marietta, Ettore, Rocco and Mela — who are fused, through seamless shooting and editing, into a character we come to know and love. The intimacy of the camerawork — the loving close-quarters attention it showers on EO with his sometimes downcast, sometimes excited gaze, his perked-up ears, his soft gray fur and the scrumptious string of carrots that at one point adorns his neck — itself feels like an expression of that love. Skolimowski isn't really trying to convey EO's perspective, aside from a few shots that suggest a donkey's-eye view, with their low-to-the-ground angles and gently blurred edges. He seems more interested in capturing a sense of what it means to be in EO's presence, bringing you close enough that you feel you could talk to him, breathe in his scent and run your fingers through his fur.

In "EO," the camera doesn't just follow the story or record the action. Its restless, exploratory movements express a kind of shared consciousness, a spirit of communion among different members of the animal world, whether they're running together in a field or sharing the same tight enclosure. It's the grace of this movie to extend that communion to the human beings who pass in front of the camera, and whose fates are tightly bound up with EO's, whether they realize it or not. And finally, that communion is extended to the audience, and especially to those of us who go to the movies to be jolted, moved and have our sense of the universe shaken up or gently realigned. The world we share with EO is cold and cruel, which doesn't mean we have to be.

(In Polish and Italian with English subtitles)

How to watch: Now in theaters