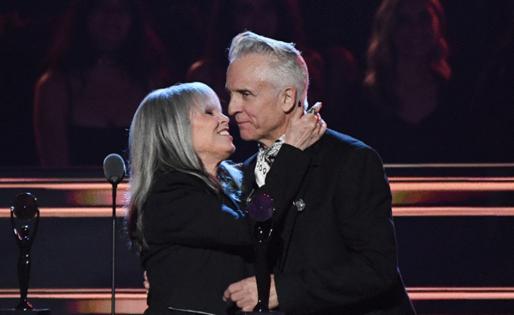 LOS ANGELES — He calls her Patricia, she calls him Spyder. As husband and wife, they are known on marquees as Pat Benatar & Neil Giraldo, and their love story is as legendary as it is long.

The rockers and recent Rock & Roll Hall of Fame inductees have been collaborating on music since 1979 when the release of Benatar's debut album, "In the Heat of the Night," featuring the seminal, hard-driving hit "Heartbreaker," rocketed Benatar and her band to superstardom. But when Benatar and Giraldo (a guitarist, songwriter and producer) fell in love, eventually marrying in 1982, their record company feared it would lose control of Benatar and tried to put a stop to the affair.

"They thought for some reason that if I wasn't with him, I could be easily controlled, and that was a big f— mistake," laughs Benatar about Chrysalis Records' attempts to undermine their love. "So people started to call us 'Romeo and Juliet' because we had so many people trying to destroy our relationship."

More than 40 years later, the couple has found unexpected synchronicity with this early phase of their life through a new musical titled "Invincible" that they are collaborating on with writer Bradley Bredeweg. The show, which is staging its world premiere at Wallis Annenberg Center for the Performing Arts through Dec. 18, channels the music of Benatar and Giraldo in a modern reimagining of "Romeo and Juliet."

"If you're going to combine the original rock star, meaning Shakespeare, with the epic rock stars that Pat and Neil are, then why not turn the story upside down?" says Bredeweg, who discovered a narrative arc for the Bard's epic love story embedded in a CD of Benatar's greatest hits during a road trip to San Francisco 12 years ago.

A theater buff since childhood, Bredeweg was obsessed with the classics but lamented their homogeneity. He knew he was gay at a very young age and would imagine himself inside Shakespearean stories about white cisgender people. As an adult he felt that exploring "Romeo and Juliet" through a modern rock lens was as an opportunity to shake up the status quo.

When he arrived at his cousin's Bay Area home, Bredeweg immediately dashed out a first draft of what is now the musical's book. Filled with diverse characters and LGBTQ plot lines, it took place in a post-apocalyptic 21st century Verona.

In 2015, Bredeweg secured a slot to perform the show at the tiny, now-defunct Rockwell Table & Stage in Los Feliz. The dinner club had established itself as a go-to place for Broadway performers visiting L.A. for pilot season, and Bredeweg was a known quantity thanks to the success of a TV show he co-created, "The Fosters."

The fledgling musical, originally titled "Love is a Battlefield," bowed in February and was an immediate hit. It sold out for almost six months straight until Benatar and Giraldo sent Bredeweg a cease-and-desist letter, forcing the show to prematurely close.

Bredeweg had been writing to the rock stars' manager for months asking them to come to the show, so the legal ultimatum was a bitter pill to swallow. What he didn't know was that Benatar and Giraldo were in the midst of trying to create a bio-musical and therefore his project and theirs could not co-exist.