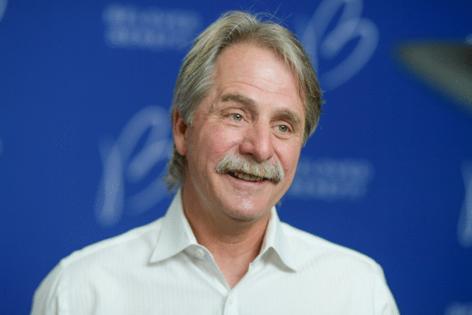 MINNEAPOLIS — Jeff Foxworthy spent a recent Tuesday morning sitting in a tree with a bow and arrow.

"That's kind of who I am," said the 64-year-old comic a few hours later, climbing up a hill from his home in west-central Georgia so he could get phone reception. "I'm very blessed and thankful to be successful at doing this. But I don't have an aircraft hangar with 50 Porsches in it. I have a farm. That's what I did with my money."

Foxworthy's passion for hunting and choice of living off the grid are just a couple of reasons why he remains one of the country's all-time most successful comics.

Ahead of a planned stop in the Twin Cities, he took time to chat about his career as he and his wife prepared to host 31 people for a Thanksgiving dinner.

Q: You taped your last TV special, "The Good Old Days," at the Pantages Theatre about a year ago. Why did you pick Minneapolis?

A: In all transparency, I should say that I originally wanted to do it at the Fox Theatre in Atlanta because that's where I'm from. That was my favorite theater as a kid. But it's just too big. Because of all the COVID stuff, we knew we couldn't do it there. There's just a few cities in the country that are known among comics as good comic towns and Minneapolis is one of them. I've always had fun there.

Q: I've heard lots of comics say that about Minneapolis. What makes a good comedy town?

Q: In the special, you didn't tell any of the "You know you're a redneck" jokes. Have you officially retired those?

A: I probably haven't done them onstage in 10 years. It's funny, that's what everybody remembers me for. I never thought about it until a buddy of mine pointed out that they were one-liners that were easy to remember. People could tell three of them at the water cooler the next day and get laughs. But even at the height of their popularity, I only did them during the last five minutes of a two-hour show. I'm more of a storyteller. If you look at the body of my work, it's mostly about family and my wife.

LOS ANGELES — A man has been arrested after allegedly breaking into hip-hop star Drake's Beverly Hills mansion on Thursday night.

As part of its first in-person event in three years, the Sundance Film Festival announced its awards on Friday. A.V. Rockwell's "A Thousand and One" took the grand jury prize in the U.S. dramatic competition, while Joe ...Read More

Everything I know about therapy I’ve learned from television, so I can’t say whether the methods in “Shrinking,” which premiered Friday on Apple TV+, are any more or less accurate than what I know from “The Bob ...Read More