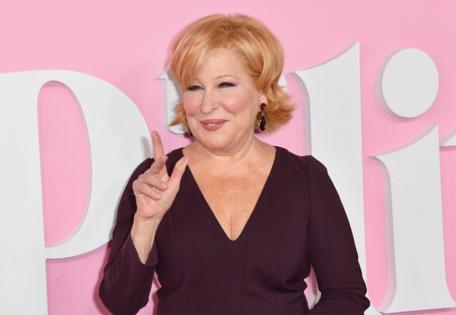 Fighting got dirty between Bette Midler and a Twitter troll who questioned her commitment to her community and the environment. It resulted in the outspoken singer dropping the F-bomb.

“Bette is so worried about this that she abandoned her house, car, stopped flying and gave up on all modern conveniences and now lives in a solar powered hut in the forest,” the anonymous person tweeted. “What a great example she set for the rest of us. Three cheers for Bette!”

Midler, who doesn’t often tweet back to the public, couldn’t hold back when it came to defending her long history of community outreach minutes before her 77th birthday.

“If you knew what I have done to mitigate the criminal environmental craziness in this country, you would kiss my a—,” she tweeted just before midnight Wednesday. “I have done my part, and I have done YOUR part. I have done geothermal, solar, hybrid, electric cars, composting, recycling, I bathe once a month! F— you!”

A rep for Midler has not responded with clarification on her bathing comment, though a source familiar with the singer tells The Daily News “I think she was joking. She smells delicious.”

Midler’s bona fides with regards to the environment are undeniable. Her New York Restoration Project nonprofit organization has spruced-up dozens of properties throughout New York City since 1995. In 2009, she recruited Queens-bred rapper 50 Cent to get involved in her gardening projects.

“Look how beautiful things are and how nice it feels when [I’m around her],” Fitty said at the time.

“In addition, I have saved parks, built parks, cleaned parks, sent kids to schools, taught them how to play music, honored nature by giving people actual LAND to grow their own food and find peace and serenity in nature,” she added. “WHAT HAVE YOU DONE BESIDES SLAG ME?”

Bookshelf Q. Batler, whose name is unknown, could not be messaged via Twitter.

Midler’s New York Restoration Project tweeted a happy birthday wish to its founder Thursday for her support of “cleaning and greening.”

Midler isn’t a complete stranger to Twitter quarrels. She famoulsy went back-and-forth with Donald Trump when he was president, with him calling her a “washed-up psycho” and “The Rose” singer referring to him as "he who must not be named.”

She maybe have gone too far in December 2021 when she became upset with Sen. Joe Manchin, D-W.Va., whom she accused of keeping his constituents “poor, illiterate and strung out.”

That tweet was followed by an apology to upset citizens of the Mountain State who made clear to Midler on Twitter that not only can they read, they can write too.