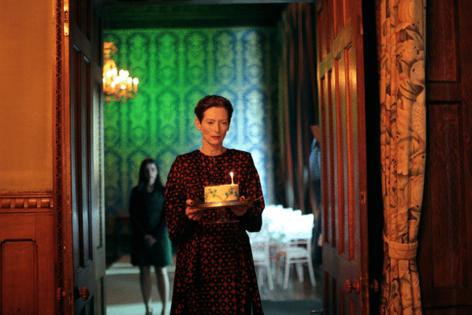 Tilda Swinton, shapeshifting multitasker extraordinare, may be one of the few living actors who run the risk of seeming lazy if they play only one character per movie. Conniving identical twins, like the ones she played in "Hail, Caesar!" and "Okja," are a particular specialty of hers. Even showier were the three roles she pulled off in the recent "Suspiria" remake, with the help of some impressive old-age prosthetics. One day, I imagine, Swinton will beat her own personal record from the 1992 science-fiction indie "Teknolust," in which she played four roles: a scientist and her three cyborg clones.

Until then, there's "The Eternal Daughter," a suave and enigmatic haunted-house movie in which Swinton plays two women — a film director, Julie, and her mother, Rosalind — spending a December holiday in the remote Welsh countryside. Their destination is a ramshackle old hotel that, in the opening moments, looms out of the darkness like Manderley or the Overlook or the setting of a '50s Hammer horror picture. It's a fabulously evocative setting that opens up to reveal shadowy halls, vertiginous stairwells and hypnotic patterned wallpaper, much of it bathed in a faintly greenish hue that could be the light of an exit sign or something more dreamily sinister. (The production design is by Stephane Collonge.)

The English writer-director Joanna Hogg has always excelled at establishing a sense of place, whether it's the stunning island getaway in her 2010 drama, "Archipelago," or the painstaking re-creation of her own 1980s London flat in her superb recent diptych of "The Souvenir" (2019) and "The Souvenir Part II" (2021). If you've seen either of those, you'll recognize Swinton's Rosalind immediately, several years older and with more of a rasp in her voice, though as elegant as ever in dress and manner. You'll also know that Julie, with her invigorating warmth and stylish dark bob of hair, is a stand-in for Hogg herself, and that this curious, unsettling story is to some degree drawn from real life. But if "The Eternal Daughter" is a sequel of sorts to the "Souvenir" movies, it's also a more mysterious kind of cinematic memoir.

Foraging once more in her garden of memories, Hogg turns up dark tendrils of suspense and quasi-supernatural portent. She also taps into a vein of dry comedy that resonates all the more within the stillness and solemnity of her impeccably composed images. The hotel, still very much the ramshackle manor it was before postwar refurbishments, groans and shudders under the weight of its many years. The air is chilly, the service chillier, the Wi-Fi nonexistent. Upon her arrival, Julie is greeted by a snippy hotel receptionist (a deliciously passive-aggressive Carly-Sophia Davies) who informs her that the double room she booked months ago isn't available, never mind that Julie and Rosalind are clearly the hotel's only guests. Well, them and Rosalind's faithful dog, Louis (played by one of Swinton's own spaniels, also named Louis).

But if no one else is staying on the property, how to explain the loud banging noises that disturb Julie's nightly slumber? Or the unseen intruder who at one point opens the door to her room, allowing Louis to escape? Is it just a trick of the wind, or is something creepier going on? Don't worry too much about Louis, by the way; Hogg may be having fun with horror conventions, but this isn't one of those sadistic exercises where the family pet winds up butchered. The spooky gothic atmosphere is doled out with a playful touch. We're invited to lose ourselves in the mists, the moonlight and the ominous music that accompanies Julie's walks on the hotel grounds, and to savor the gloom and the grain of Ed Rutherford's 16-millimeter cinematography.

Swinton's casting is the movie's most audacious bit of magic, and also its subtlest. Hogg, working in her usual intimate, unhurried style, shrewdly downplays her own gimmick. She seldom positions Julie and Rosalind in the same shot, instead cutting rhythmically between them mid-conversation. It's a technique that minimizes the need for body doubles and digital trickery, and a splendid reminder of how much magic a resourceful filmmaker can conjure on a limited budget.

Helle le Fevre's steady back-and-forth cutting also suits Julie and Rosalind's conversational rhythms, which smack of what might strike some ears as a quintessentially English reserve. The two are polite, hesitant and reluctant to step on each other's sentences. They begin most mornings by going over their respective plans: Rosalind will spend the day resting, Julie will head upstairs and try to get some writing done, and they'll both do their best to avoid the bothersome cousin nearby who's eager to pay them a visit. But their most revealing and moving conversations unfold in the hushed dining room where they meet in the evening, selecting entrees from a woefully limited menu and dancing delicately around the matters at hand.

There's a mystery at the heart of this mother-daughter relationship, and "The Eternal Daughter," despite its trim running time, is slow to surrender its secrets. Suffice to say it has something to do with Rosalind's last visit to these premises decades earlier, when she was brought here as a child to shelter during the war. Her memories of that period are an unsurprising mix of the idyllic and the traumatic. They are also a source of potential artistic inspiration for Julie, who has brought Rosalind back to this precise spot with more than just a nostalgic holiday in mind.

What right does a storyteller have to draw on someone else's experience? Hogg didn't spare Julie that difficult question in "The Souvenir," and here she again subjects the character — and thus herself — to rigorous critical scrutiny. Julie's own reservations are apparent in the surreptitious way she switches on her voice recorder when Rosalind starts reminiscing, and also in the guilt she feels whenever her sensitive probing of her mother's memories strikes a nerve. One way to interpret the movie's genre trappings — the strange noises, the creeping unease, the pervasive loneliness, the often-indeterminate time of day, the clever use of mirrors to splinter Julie's own image — is as a manifestation of that guilt. Julie is losing herself in an ethical fog as well as a literal one.

All this might have made "The Eternal Daughter" play like a dubious exercise in self-doubt, an apologia for its own existence. But the movie is much more than that. Hogg has fashioned a deeply moving tribute to her mother, one that hums with wit and glows with affection. And in Swinton's exquisitely delineated performances, she has hit on something far more profound than a mere stunt. Swinton's two faces suggest the strange, often-uncomfortable transference of identity that can happen over time between mothers and daughters. They also give rise to the idea that to enter into someone else's experience is, on some level, to become them, to partake of their flesh and spirit.