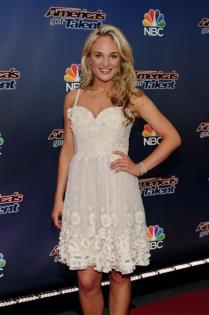 NEW YORK — When Jessica Willis Fisher was in her early 20s, her life looked different from that of most people her age. Instead of expanding her mind in college or partying with friends, Fisher was the unwitting star of a reality TV show that presented her family in a deceptively wholesome light.

"The Willis Family," which premiered on TLC in 2015, featured the telegenic family of 14 — parents Brenda and Toby, plus 12 children who performed in a band and had names beginning with the letter "J." Like "The Partridge Family" meets "19 Kids and Counting," the show followed the Willises as they toured the country and lived according to strict religious beliefs: the kids were homeschooled, birth control was forbidden and casual dating was out of the question.

Fisher, a sunny, fiddle-playing blonde and gifted singer-songwriter, was the eldest child in the family and the unofficial leader of the group, known as the Willis Clan, which had risen to fame through a "Sound of Music"-themed contest on "Today" and a successful run on "America's Got Talent."

They were, in short, a perfect fit for TLC, which became a cable powerhouse with popular shows about large, conservative Christian families such as the Duggars of "19 Kids and Counting" and the Gosselins of "Jon & Kate Plus 8." For a brief moment, "The Willis Family" seemed poised to be the network's next big hit, garnering more than a million viewers a week in its first season.

The facade crumbled overnight in September 2016, when family patriarch Toby Willis was arrested on charges of child rape. He eventually pleaded guilty to four counts and was sentenced to 40 years in prison. In a statement at the time, TLC said it was shocked by the news and had made the decision to cancel the show prior to Willis' arrest.

As Fisher, 30, details in a harrowing new memoir, "Unspeakable: Surviving My Childhood and Finding My Voice," she was one of her father's victims, enduring sexual abuse that began when she was 3 or 4 years old — and didn't yet have the words to describe what was happening to her — and continued for more than a decade.

The book paints a picture of a violent, narcissistic patriarch who ruled over his family like an apocalyptic cult leader and saw his talented children as a path to fame and fortune. But it is also a tale of resilience, chronicling Fisher's efforts to escape her family at the height of their reality TV fame, bring her father to justice and move on from her traumatic childhood.

"I needed to tell my story," said Fisher as she sat in a quiet hotel lounge in Times Square on a recent afternoon, a few blocks away from Radio City Music Hall, where nearly a decade ago the Willis Clan charmed the "AGT" judges with their folksy covers of hits by Huey Lewis and others. "It's been a healing process to reclaim things. When your image, your voice, all your talents — you, as a person — are tied up in one story, you want to tear it down and replace it with the truer, realer story."

That story begins in Chicago, where Fisher grew up in a household defined by rigid fundamentalism. "I was taught a woman's lot in life is first to be subject to her father, and then, after marriage, to her husband," she writes.

Tragedy cast a long shadow over the family: In 1994, six of Toby Willis' younger siblings were killed in a horrific van accident. His parents eventually received a $100 million settlement and gave him a portion of the money, which he used to relocate his growing family to an idyllic 100-acre property near Nashville, Tennessee.