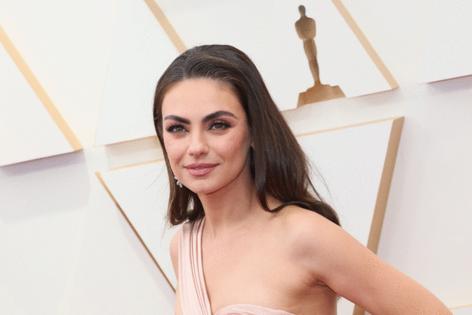 Kunis — who on Wednesday was named among People magazine's People of the Year for fundraising efforts benefiting her war-torn homeland — shared the details of their first meeting, which came nearly a decade ago when a remake of the comedian-turned-politician's TV series "Servant of the People" was being shopped around Hollywood.

"I had a deal with ABC, and I was trying desperately to bring the show to the network. We ultimately got outbid, but in the process, I talked to this actor named Zelenskyy," Kunis told the magazine.

"Years later I was reading the news and saw Ukraine had a new president. I thought to myself, 'A Jewish president? Mazel tov! That name sounds so familiar.' I searched my emails and was like, 'I know him!'" she said, adding, "Our own little meet-cute."

The two met again over the years, notably in 2019 when she and her husband, Ashton Kutcher, took a meeting with the leader when he visited the United States to attend the U.N. General Assembly in New York. At the time, Ukraine's first lady, Olena Zelenska — an architect and screenwriter — posted about their shared meal on Instagram, describing their conversation about cinema as "fruitful" and including hopes to develop and attract investors to Ukraine's film industry.

Such plans were likely derailed on Feb. 24 when Russian forces invaded Ukraine in a war that has raged for nine months. Within weeks of the invasion, Kunis, who was born in the former Soviet nation, and Kutcher launched their Stand With Ukraine campaign on GoFundMe

The celebrity couple donated $3 million to the effort and surpassed their $30 million goal within a month. The actors' campaign benefits global logistics experts Flexport.org, which was commissioned to organize shipments of relief supplies to refugee sites in Ukraine's neighboring countries of Poland, Romania, Hungary, Slovakia and Moldova. They also tapped vacation rental company Airbnb, in which Kutcher was an early investor, to provide free, short-term housing to Ukrainian refugees.

In March, when the fundraiser hit the $35 million benchmark, Zelenskyy publicly thanked the couple for their support and said they were "among the first to respond to our grief."

"Impressed by their determination. They inspire the world. #StandWithUkraine," he tweeted, sharing a photo of what appeared to be a video call among them.

"We can't become desensitized," the "Bad Moms" star told the magazine. "Helping — not even asking, just doing — should be our standard norm."